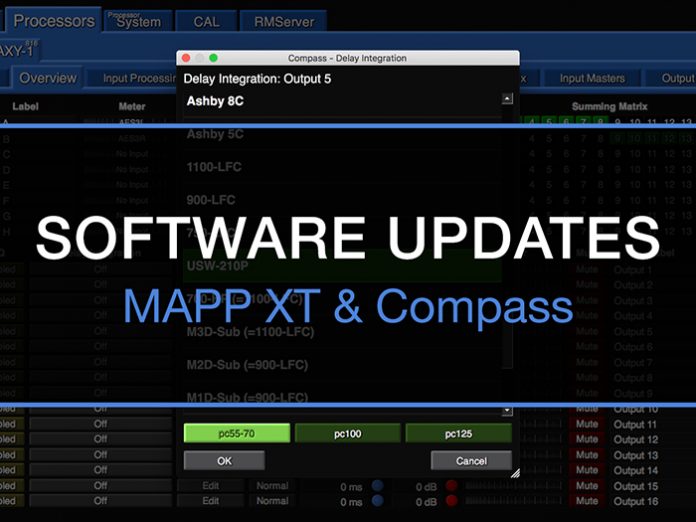 Meyer Sound has announced significant upgrades of its MAPP XT system design tool and Compass control software, including greater integration between the two platforms along with new, streamlined workflows and inclusion of data sets for new products.

The new release of MAPP XT (1.2.2) now offers users the ability to perform copy and paste operations within the sound field, a feature that speeds up the design process. Other important additions include design data sets for the new USW-210P subwoofer and Acheron loudspeakers with woven screens. Predictive capability is now available for ground-stacked configurations for LEOPARD line array loudspeakers with companion 900-LFC low frequency control elements and for LINA loudspeakers with companion 750-LFC elements.

In the Compass control software release (4.3.4), the most significant advancement is the ability for users to open a MAPP XT project in Compass and have it automatically populate settings for output processing, delay integration, array correction and labelling of channels. Also included are delay integration for several of Meyer Sound’s newest loudspeaker products, including the UP-4slim ultra-compact installation loudspeaker and the newly released USW-210P compact narrow subwoofer. In addition, delay integration has been expanded to include the Ashby ceiling loudspeakers and the UP-4XP ultra-compact loudspeaker.

The new Compass release supports the following firmware versions in Meyer Sound products controlled by the software: GALAXY 1.3.4, RMServer 2.5.0 and CAL 1.5.0.  The RMServer 2.5.0 version now includes support for the new USW-210P subwoofer. A number of bug fixes also were addressed in the new releases.

All new Compass versions also incorporate/are compatible with RMServer 2.5.0, which now includes support for the USW-210P. A number of bug fixes also were addressed in the new releases.

“At Meyer Sound we are constantly updating our software to achieve greater flexibility, faster workflows and stable operation in the most demanding conditions,” said Director of Product Management Todd Meier. “This latest simultaneous release of new MAPP XT and Compass updates represents some of the most significant improvements in functionality and ease of use since Meyer Sound first entered the digital era.”