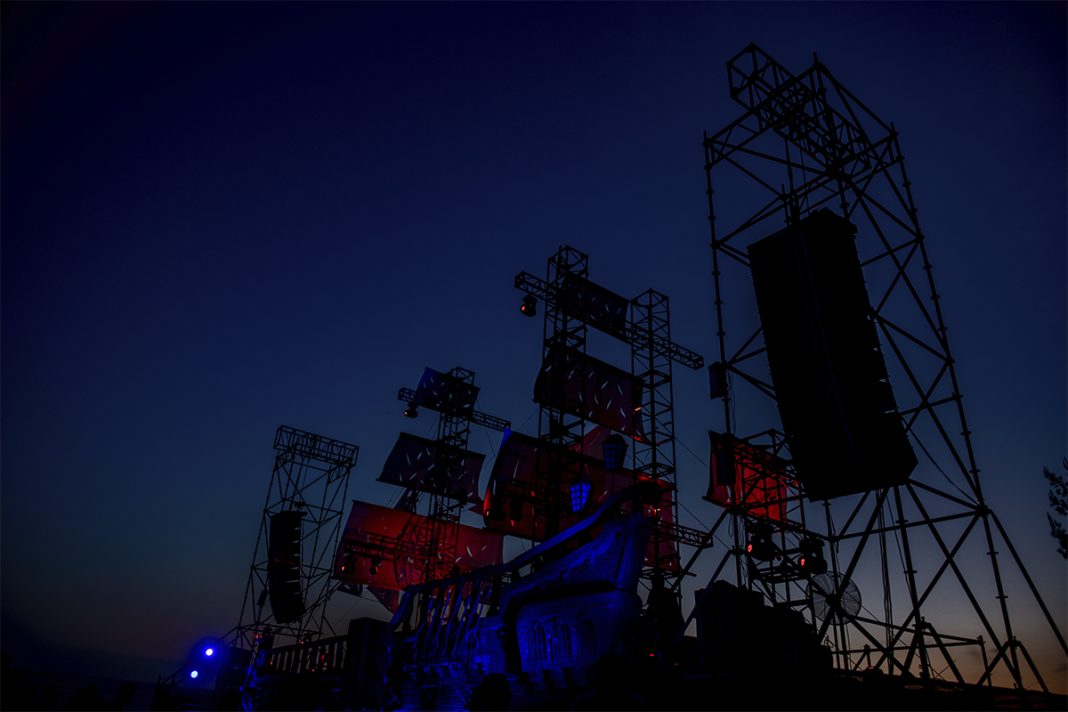 Back in early June, while the UK was introducing test events including Download Pilot, over in Albania, the first unrestricted festival opened its gates for five days of performances from some of the country’s most popular house and techno DJs. With COVID-19 cases in Albania decreasing since February, organisers of Unum Festival had been confident since early 2021 that they would be able to put on the second rendition of this event. A few weeks prior to the event, the festival received more positive news when the Albanian government resolved to ease restrictions further, meaning some foreign tourists could now enter the country to join the party.

Audio supplier, Loud Professional, provided equipment for all three of the stages – the Main Stage, the Pine and the Beach – and primed each performance area with its own brand of speakers, all of which powered by a range of Powersoft amplifier platforms. Talking TPi through the setup was Loud Professional’s General Manger, Valerio Cherubini.

“We got involved with Unum Festival many months prior to the event,” stated Cherubini. “The organisers were keen to bring in Loud Professional due to the great appeal that our system is having in the industry.”

The Main Stage system comprised 16 Loud Professional Formula F212s, 24 VH Sub121Hs and front fills made up of six VH Layer112Hs. The company’s speakers were also used on stage monitors for the DJs, with four VH Layer112H+EMDs as well as a pair of VH SM15s backstage.

Cherubini was keen to share the praise the company had received from the artists. “Secret47, the most important Albanian DJ, who played in the Main Stage, said after his set: ‘Loud Professional for a festival is like having your money in a Swiss bank,’” beamed Cherubini.

“Technically, F212 is a four-way line-array system, completely horn- loaded. This is why it’s able to guarantee extraordinary performances for an out of standard SPL. This is what DJs love to have – the greatest impact ever,” he added. “Impact is not all; sound needs to be well controlled and never aggressive, always giving the maximum comfort to everyone. The mission is to deliver the best listening quality, transferring great emotions and good vibes to the audience.”

Powering each of the stages were Powersoft’s X8 amplifier platforms, which the General Manager was pleased to report “worked perfect, as always!” He continued: “We prepared all setups virtually and when we arrived on site, we only spent some time for the finest tuning. We had the power and tools to deliver the best listening experience you can expect from a professional sound reinforcement system. ArmoníaPlus is an excellent management software, always giving the right tools to work.”

He continued to describe one of the main challenges for the system was the long-term running times, with one of the stages working 24 hours per day without a break. “It’s testament to Powersoft’s products that we had no problems,” he enthused. “Amplifiers were stable for the duration. Some channels were loaded at 2.7 ohms and the temperature was high all day.”

The Loud Professional General Manager was keen to highlight the work of those that managed this year’s Unum Festival that comprised of; Production Manager Elliot James Shaw, Logistic Manager Fosco Cicola, Sound Designers and Sound Engineers Michele Azzimonti and Mauro Casazza, Audio Technician Matteo De Vitis and Backline Tech Massimo Casponi Cherubini. He then took the time to reflect on the hard year just passed. “During this time away, we’ve concentrated exclusively on finalising some new projects started a few years ago,” he explained. “Since the beginning, Loud Professional was focused on clubs and event installations. This is why we decided to enter the systems integration market, designing many different product ranges already launched and fully functional such as the Gamma, MicrHome and Nucleo Series. We also focussed on designing some of our own software,” he stated.

“We are waiting for the end of this tragic moment and I think that we are at the end of the tunnel,” he concluded. “Many festivals are scheduled in the next few months and we will be involved in some of them. We are also creating the new Loud International team, with a goal of entering the US market as soon as possible.”