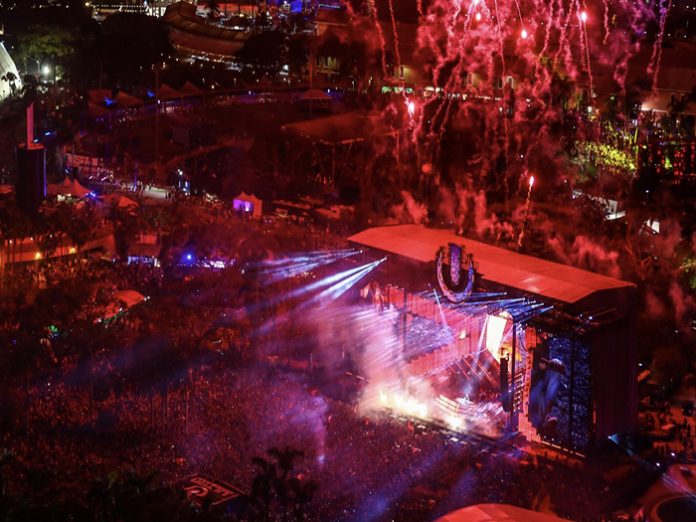 The world’s premier electronic music festival, Ultra Music Festival, turned 20 in 2018 and the occasion was marked, in part, by big beam lighting effects from an array of Elation Professional IP65-rated Proteus Beam moving heads that lined the top of the festival’s iconic Main Stage.

Production and lighting design for the Main Stage was by The Activity, its 9th year of involvement with the festival. The Las Vegas-based production and design firm, headed by lighting veteran Patrick Dierson, wanted to do something special for the festival’s 20th year and chose the Proteus Beam for a prominent look.

“Because this was Ultra’s platinum anniversary we wanted an element within the design that would specifically represent its 20 years of celebration and the Platinum Beam’s bigger brother, the Proteus, seemed like the perfect choice,” stated Dierson, who served as lighting and production designer on this year’s Main Stage.

The Activity worked directly with Ultra’s creative director Richard Milstein, as well as AG Production Services who supplied all of the lighting and video elements for 2018’s Ultra. Dierson approached the project with a simple design aesthetic in mind for the Proteus lights but their role expanded as show time approached.

“During performances, they were to simply be twenty static beams reaching out over the downtown Miami skyline emanating from the structure and then produce sky tracking movements during the short set changes to maintain a level of visual excitement,” he said. “By the time we were in full show mode, many of the guest LDs started to incorporate them into their performances, which obviously turned the units into a much larger production element for the performances.”

The 20th Anniversary edition of the spring music celebration ran from March 23-25 with over 165,000 revellers making their way to Bayfront Park in Miami. The 3-day celebration ran like a highlight reel of EDM stars with 29 artists taking the Main Stage over the three days including names such as Swedish House Mafia, Hardwell, Steve Aoki, The Chainsmokers, Afrojack, Tiësto, David Guetta and many more.

A total of 20 Elation Professional Proteus Beams sat atop the Mountain Productions-built Main Stage, ten fixtures per side, and splayed a barrage of dense 2-degree beams that could be seen for miles around. “The Proteus offered us the raw output that we required for sky tracking effects in a compact form factor with the full IP65 rating,” Dierson said of the weatherproof beam lights, which were completely exposed to the elements for a little over a week.

Outdoor events bring their own logistical challenges and Proteus has helped eliminate some of them such as the need for cumbersome (and costly) shrouds. Substantial power in a relatively compact IP package is another benefit as Dierson noted. “Having something that was of reasonable weight and size made the task of mounting the units significantly easier than going with the traditionally larger Xenon-based solutions for such an effect,” he said of the Elation Professional Proteus Beam whose design features include CMY colour mixing, colour wheel, gobos, prisms and a frost filter. This was the second year running that The Activity has used the Elation Professional Proteus Beam on Ultra’s Main Stage.

Another Elation Professional lighting fixture used on 2018’s Main Stage was the Colour Chorus 72, a versatile 6-foot LED batten wash light (RGBA) often used for truss warming. When a powerful colour-changing unit was needed for detailing and highlighting, Dierson built 112 of the LED battens into the architecture of creative director Milstein’s stage design.

Ultra has come a long way in its 2 decades and a lot has changed along the way. But one thing is certain, with world-class artists returning year after year and a production that continues to surprise and excite, the Ultra experience is still magical.