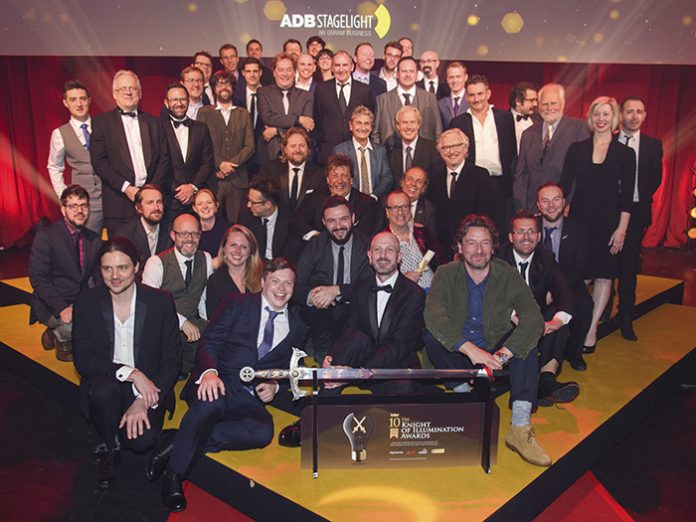 Sunday 17 September marked the tenth anniversary of the prestigious Knight of Illumination (KOI) Awards, held at the Eventim Apollo in London. During the dazzling evening event, 24 respected designers were ‘knighted’ – and bestowed with the iconic KOI sword.

The event was skillfully compered by the inimitable Ola Melzig, an internationally renowned technical director perhaps best known for his tireless work on the Eurovision Song Contest – the world’s biggest televised music event.

More than 500 entertainment technology industry professionals gathered together to celebrate the achievements of the many international lighting and video designers, whose work on shows across the UK earned them a coveted place on the shortlist for this year’s KOI Awards. The winners are as follows:

Winner of The ADB Theatre Award for Plays:
Richard Howell for Guards at the Taj

Winner of The ETC Theatre Award for Dance:
Fabiana Piccioli for Echoes

Winner of The PRG XL Video Theatre Award for Musicals:
David Hersey for Fiddler on the Roof

Winner of The Hawthorn Theatre Award for Projection Design:
Lysander Ashton for City of Glass

Winner of The Robert Juliat Theatre Award for Opera:
Simon Corder for The Queen of Spades

Winner of The Light Initiative Television Award for Events:
Bernie Davis for BBC1’s Festival of Remembrance

Winner of the STLD Award:
Ross Williams for his unwavering support to television lighting designers.

Winner of The MA Lighting Award for Club:
Louis Oliver and James Scott for You Me At Six

Winner of The Avolites Award for Stage:
Michael Straun for The xx

Winner of The GLP Award for Arena:
Jeremy Lechterman and Jackson Gallagher for alt-J

As is traditional, the final KOI Award of the evening was the Enrico Caironi Lifetime Recognition Award, named in memory of Claypaky’s former commercial director, one of the instigators of KOI, who sadly passed away in 2011.

Internationally renowned stage lighting designer, Richard Pilbrow presented the Enrico Caironi Lifetime Recognition Award to Rick Fisher, the prolific and talented lighting designer who has won multiple awards and critical acclaim in the West End, Broadway and around the world.

Fisher was recognised by the Award not only for his achievements in lighting design, but also for his altruistic contributions to industry charities, from his help starting Light Relief to his current work with technical entertainment charity, Backup. Fisher has also helped guide the Association of Lighting Designers to its current position as the largest body of lighting designers ever assembled.

To close the evening, Backup was presented with a cheque from KOI Headline Sponsor Claypaky for £5,000.

Pio Nahum, CEO of KOI Headline Sponsor Claypaky, said: “The Knight of Illumination Awards has evolved into the most significant celebration of lighting and video design talent. This Awards ceremony provides the ideal platform for rewarding the hard work, dedication and outstanding creative talent of professionals working in show production on stage and screen. Congratulations to all of the shortlisted and winning designs. We are exceedingly proud of the development of KOI over the last ten years and we are delighted to have seen the event grow and attract the sponsorship and support of almost all of the major businesses in the entertainment technology industry.”

The Knight of Illumination Awards is organised by The ALD, The STLD and The Fifth Estate and produced and delivered by The Fifth Estate. Lighting Designer Durham Marenghi and his wife Jennie Marenghi co-founded the awards and now serve as coordinators.