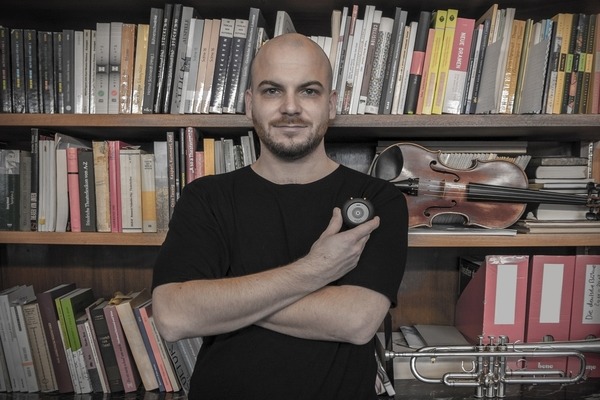 DPA Microphones’ new pocket-sized d:vice MMA-A Digital Audio Interface has freed musician Nikolai Tunkowitsch from the confines of the recording studio, by allowing him to record demos and capture musical ideas on his iPhone.

Supplied by DPA’s Austrian distributor Studer, Tunkowitsch’s d:vice has already proved invaluable as a field recorder, enabling him to capture an entire run through rehearsal for Wien ohne Wiener, a new project at the Volkstheater in Vienna. “I wanted to record the run through rehearsal as a document and to see where we might want to make changes. I used the d:vice in conjunction with my phone and a d:dicate 4011 Cardioid Microphone. It was surprisingly easy to use and the recording was very good. The great thing about the d:vice is that you can record stereo audio (which is why I am buying another d:dicate 4011!) and combine it with the video camera on your phone to capture high quality sound and pictures. If you want to overdub, connect the d:vice to your laptop or iPad so that you have a headphone jack.”

“My decision to invest in a DPA microphone was taken 10 years ago when I was looking for a close miking solution for my violin,” he explains. “It is not possible for me to use pick-ups (except on my electric violin), so when I was advised to try the d:vote 4099 I was pleasantly surprised because it was exactly what I wanted. I am now experimenting with delay and my loop station to bring my trumpet and flugelhorn on stage in combination with my ‘electric’ violin (which is actually a normal classic violin with a Yamaha Violin Pickup mounted into the bridge). This will allow me to use my ‘normal’ violin as the lead instrument. All of this is a job for my d:vote 4099s because they are very lightweight and very resistant to acoustic outside influences, making them the ideal microphone choice if I want to switch to different instruments during a live performance. They also give me the close miking I need for the loop station.”

While the d:vote 4099 is now Tunkowitsch’s standard mic for live performances, he also owns a d:dicate 4011 Cardioid Microphone that he uses for important gigs in large concert halls – for example the Konzerthaus Vienna, the Philharmonie in Köln or the State Opera Berlin. “I discovered the d:dicate 4011 when I was looking for a miking solution that allowed me to combine live and studio use,” Tunkowitsch continued. “The 4011 with a MMP-G preamp mounted in a GSM Gooseneck Shock Mount is ideal for both scenarios because I can use a gooseneck to close mic my violin or I can change the pre-amp and use it on a mic stand for recording. The modular system is brilliant, and in combination with the sound quality it is awesome. The sound I get from this microphone is more natural than natural – what I hear while playing is exactly what I get on the recording.”

“I think DPA Microphones were born for that recording and I plan to use 2 d:dicate 4011s, a d:dicate 4006 Omnidirectional Microphone and a d:vote 4099 as backup,” he says. “This set up will allow me to be very flexible and record high quality audio from almost any instrument, anywhere.”