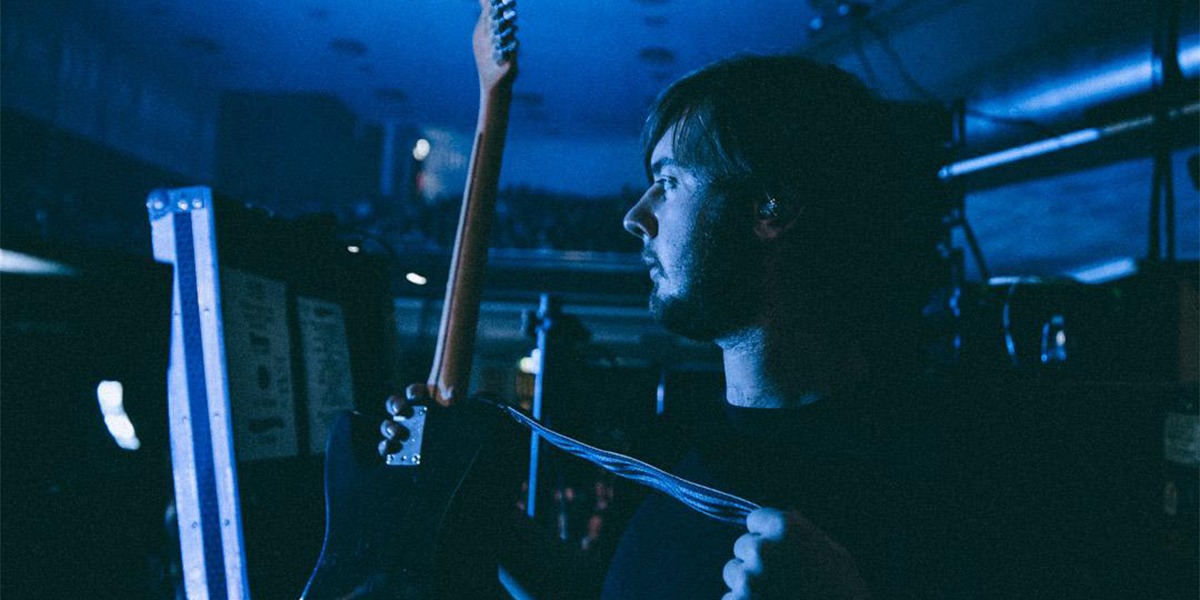 How did you break into the live events industry?

“I’d been working with local bands for a wee while in Aberdeen before taking on some Dundonian acts, but my ‘big break’ came by meeting Blossoms when they played Tunnels, where I was working in-house in February 2016. A few months later, I met the team at Great Escape, where Dan ‘Woolfie’, who was Tour Manager and Backline Tech at the time, was trying to get the lads to interviews in the middle of the load-in. I stepped in, helped, then got asked to come on the road for a week. Four years later, I’m still touring with them.”

What are some of your career highlights so far?

“The Blossoms show at Edgeley Park, Stockport, last year was something special as it was the biggest show that the band and we as a crew had delivered. Another was the We Are Manchester reopening show in 2017, where I looked after Blossoms and Gem from Noel Gallagher’s High Flying Birds. Being trusted to work with the headliner on such a huge show at such an early point in my career really gave me confidence in what I was doing going forward.”

How did it feel to win Backline Tech of the Year at the TPi Awards 2020?

“I’d been nominated twice previously, which I was flattered about. When I was nominated this time round, I felt that with my two main acts having a ‘quiet year’, I didn’t think I deserved the nomination. I was also up against Joe Cox and Matt Tag, who I have a lot of respect for and, in my eyes, were more deserving than I was. That said, it was quite nice when I found out I won!”

What have you been up to during the lockdown?

“For the first few months, I did daily walks and bike rides – nothing work-related as I didn’t see dropping off guitars at mine as an essential journey. However, once restrictions on Scotland eased in June, I began taking in guitars to work on. I’ve been really surprised at how well received it’s been, as I thought I’d struggle to get a busy month of bookings but, as it stands, I’ve got guitars coming through into October, so I’ll just milk that as long as I can.”

How important has the camaraderie of the SK2 Crew been during this trying time?

“It’s comforting and important to feel that just because you’re on your own and not working, that doesn’t mean you aren’t part of something. Some of our crew haven’t qualified for any government support and, with the rest of us facing a cliff edge with SEISS finishing, it’s been more important than ever to band together. Woolfie had the great idea of us doing a big push on socials to share what we are all offering off tour; it has helped, but it is not enough – that’s where the government need to step in and support the sector.”

What do you have planned for the next few months?

“Lots more guitar setups and some rig building on the horizon and I’m fortunate to be doing a show in Hamburg, Germany, in a few weeks. My next full tour isn’t until February, so I will just have to wait and see what happens.”