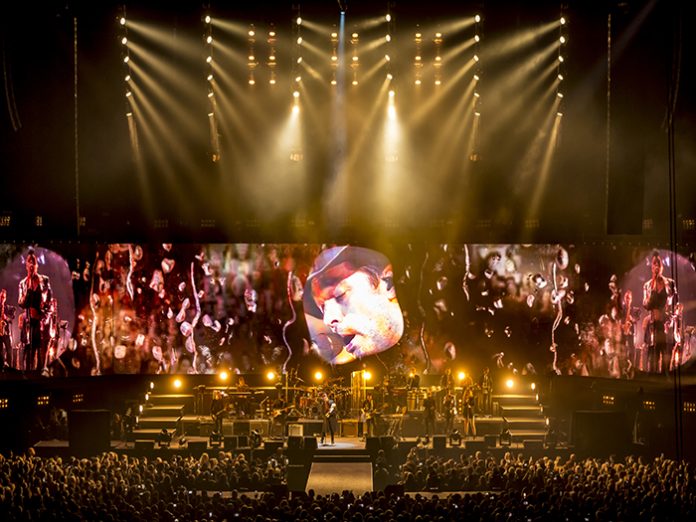 December 2017 witnessed Dutch singer Waylon, appearing in association with Radio Veronica and its Top 1000 show, play 3 sold-out nights at the Ahoy Rotterdam arena. The Radio Veronica brand goes back to the 1960s – when it broadcast from offshore – and its Top 1000 is a hotly anticipated announcement, yearly listing ‘the 1000 best songs ever’.

The Rotterdam shows featured Waylon, plus special guests, delivering tracks from the Top 1000 list. Dutch creative outfit Tenfeet was charged with providing pre-program studio facilities for lights and video, as well as operating media servers during the live gigs. Given carte blanche by the event organisers to configure a video control system to exactly match its wishes, Tenfeet – less than 2 weeks before rehearsals and pre-programming – selected for the Hippotizer Montane+ media server.

“Only 2 weeks before, we heard about Green Hippo’s newest Media Server”, explained Ton Swaak of Tenfeet, “which was the Montane+, optimised for Notch software. We were familiar with the software and Green Hippo has always been a key part of our rental stock. Even though we had never seen Montane+ ‘live’, we knew that we could rely on the quality of this product, so we placed an order with Ampco Flashlight Sales for Green Hippo’s first batch of Montane+ models.”

Having taken delivery of the world’s first Montane+ units, Tenfeet put the finishing touches to the Top 1000 show, which featured 20% pre-rendered content, with the remaining 80% a live feed. With the big LED screen stretching the width of the stage, Tenfeet placed 6 HD dome cameras in the set, a pair of manned cameras FOH, plus handhelds within the audience and onstage. A separate user controlled the dome cameras with the Tenfeet operator performing the actual switching.

“There was close and intensive communication between the operators, as well as with the ascender operator from Faber audiovisuals,” said Swaak. Ultimately, the Montane+ controlled all camera signals via SDI inputs, and ran Notch along with the pre-rendered content.

Swaak continued: “The Montane+ system was completely new to us, together with the use of Notch, as was the workflow this set-up required between lights, content creators, video programmer and camera crew. This could have been unsettling for some, but the instant on-site support from Green Hippo’s Phil Blue and Ryan Brown, as well as from Luke Malcolm of Notch was incredibly supportive. The Montanes did a great job, above expectation and couldn’t even ‘cool down’ before being transported to the next job – Golden Earring live in Ziggo Dome, Amsterdam. After that, we’re packing them for 14 sold-out Rotterdam shows. So, to be continued!”