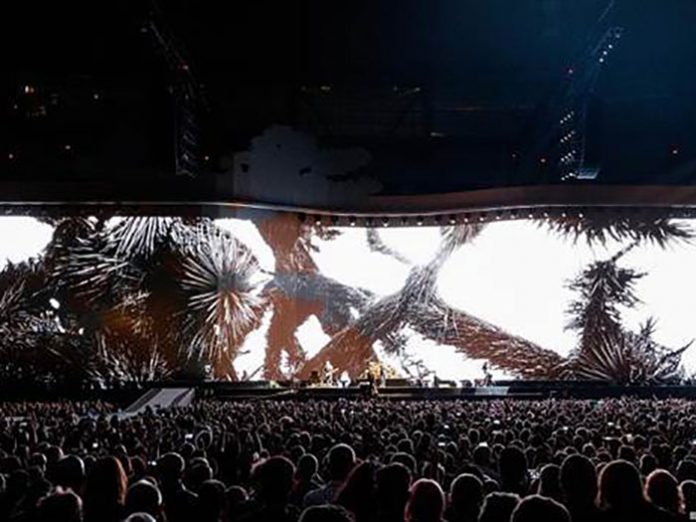 Known for their very intricate stadium shows, U2 honours the 30th anniversary of their 1987 album, The Joshua Tree, by taking a robust, cinematic set and the albums legacy hits on the road for a stadium tour across North America and Europe.

To showcase the Joshua Tree album to its fullest potential, the tour required a team full of innovative U2 vets who have grown with the evolution of production expectations for stadium shows. Having worked on several of U2’s previous tours, Tait was entrusted to build the stage under the creative direction of Willie Williams.

Tait custom-built a massive, 192ft wide, main stage that stretches parallel to a cinematic video screen which displays high-definition scenes of sunny, desert-like landscapes to mimic the infamous Joshua Tree theme. The enormous set mirrors the Joshua Tree silhouette with a custom scenic tree top header, attached above the video screens, in addition to a 75ft long runway which leads to the tree-shaped b-stage.

Written in the mid 80s, the Grammy award-winning album focuses on the cultural richness, spiritual vacancy and cynical American environment created by political scandals during that era. Ironically, that same political upheaval has since resurfaced under this new political regime and U2 was ready to use their popular platform to spread the word of love. As Edge explained: “We were looking at the anniversary of The Joshua Tree album, and it started to dawn on us, which is that weirdly enough, things have come full circle.It just felt like – Wow, these songs have a new meaning and new resonance today that they didn’t have three years ago, four years ago.”

It is the first time the band has ever taken an entire album from their back catalog on tour. “It’s so not like us to throw ourselves a birthday party. We didn’t know if we could pull off a tour that honours The Joshua Tree without it being nostalgic. That’s an oxymoron.” said Bono.

Though a throwback may seem out of character for these modest legends, U2 didn’t skip a beat kicking off their show with a performance of ‘Sunday Bloody Sunday’ perched on their tree-shaped stage before making their way to the main stage.

After performing the entire Joshua Tree album, U2 brings fans back to present time during their encore with new songs from their up and coming album – Songs of Experience – which is said to release later this year. The Joshua Tree Tour will come to a close this summer but until then, U2 continues their stadium trek reminding the world of how far they have come and the incredible journey that got them where they are today.