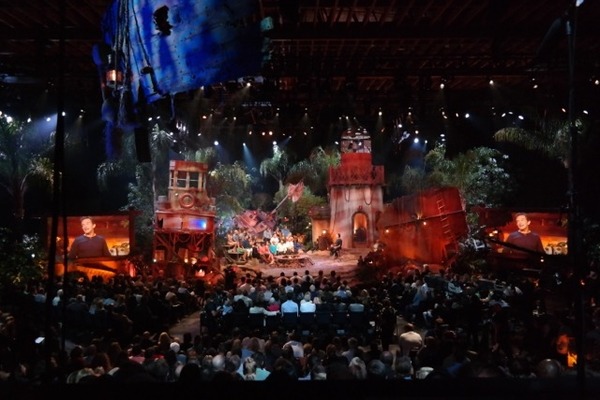 “We wanted to move to more LED and try something different without taking away the success of past live shows,” said Fable, who has traditionally used a profusion of discharge lamp fixtures on Survivor finale shows. “We wanted to see how much could be rolled over to LED and see how much more bang we could get with the extra fixtures it allowed us to use.”

The rig consisted of 250 Elation Professional lighting fixtures including 80 Fuze Wash Z120, 26 Fuze Wash Z350, 40 Colour Chorus 12, 10 Colour Chorus 48 and 16 Satura Spot LED Pro, all Elation Professional LED fixtures, along with Elation Platinum SBX and FLX hybrid luminaires and other lights. “It’s the most LED we’ve had on a Survivor show,” Fable, who lit his 11th live Survivor season finale, explained. “The show looked as good as ever and the client was very happy.”

The season finale of the 34th season of the Emmy award-winning reality TV show, aired live on May 24 2017 from Stage 23 of CBS’s Radford Studios in Los Angeles. Fable, who says he has been fortunate to be part of the Survivor finales for many seasons, programmed some of the early finale shows before moving into the role as Lighting Designer.

“I had given up on finding a light that had the same characteristics as a VL5, which has been a cornerstone of countless shows. That changed when I was introduced to the Fuze. The first thing that attracted me to it was how it softly diffuses light. It fills all the roles for me that the VL5 would play even though it’s an LED fixture whereas the VL5 is an incandescent,” Fable explained.

The Fuze units were placed at several different positions, including in the rig, on the floor and even hidden behind and inside scenery elements. The LED wash lights use a single source lens system that emits an extremely even beam with a lens face that appears as one colour on camera, a non-pixel look that is unique on the market.