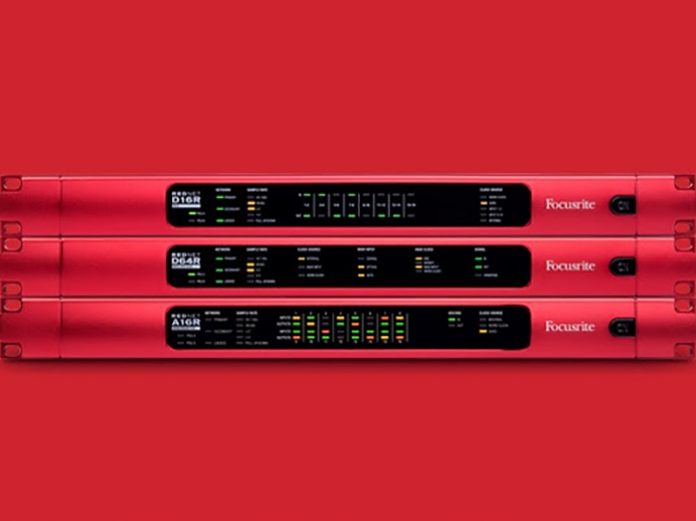 While the New England Patriots came from behind to win a historic Super Bowl victory in February, the on-field live entertainment made its own kind of history.

The live sound provider for the event for the last two decades,ATK Audiotek, for the first time implemented Dante based digital audio networking for the pre-game and halftime live music events, including a breathtaking performance by Lady Gaga. After nearly 20 years using an older audio signal transport system, ATK Audiotek this year migrated to a Dante-based digital audio networking system utilising key RedNet interfaces from Focusrite.

A DiGiCo D5 console was used to mix, and two distinct systems routed the audio for different purposes. First, a number of RedNet D64R 64-channel MADI-Dante bridges converted the D5’s MADI signal to the Dante network, and audio was routed to four loudspeaker carts in separate quadrants of the stadium, employing RedNet D16 AES 16-channel AES3 I/O interfaces. Meanwhile, the RedNet A16R’s 16 channels of analog I/O were used to feed both the broadcast trucks and the stadium’s FOH position, acting as the intermediary between the Dante network audio and the stadium’s existing analog wiring infrastructure.

“I’ve been waiting years for this day,” enthused Kirk Powell, Design Engineer with ATK Audiotek on the show. “This Super Bowl was truly an inflection point for audio at the event. It marked the shift to the 21st century for audio networking.” It was a major shift.Powell shared it required training to bring the crew fully up to speed on the new system. But the advantages were significant. “The old system we had been using just did not have the kind of flexibility that Dante and RedNet can offer,” he added.

“Now, if they quickly needed a microphone moved, it was just a matter of moving it on a screen and it was done. RedNet as the interface made this shift so much easier. The RedNet’s own interfaces are simple and intuitive, their reliability is rock solid, and the sound couldn’t be better. RedNet made the shift to the next generation of signal transport for the Super Bowl a sure thing.” concluded Powell.