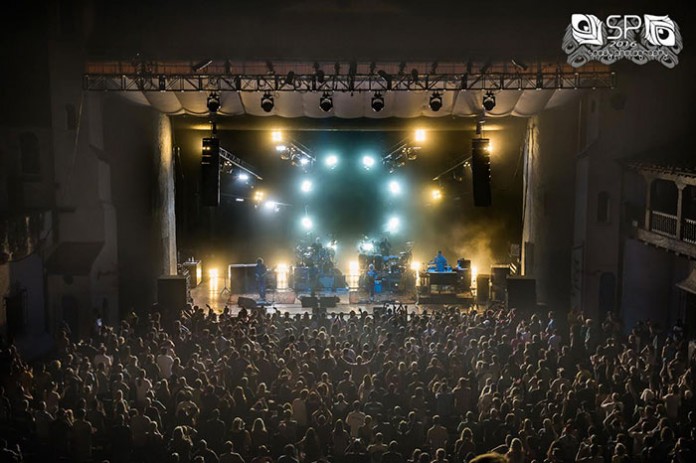 Even by the standards of Jam bands, The String Cheese Incident defies easy categorisation. What else to say about a group of talented musicians that jams with Skrillex as deftly as it covers hits by a disparate group of artists from the Bee Gees to the Grateful Dead? This is in addition to its own genre-smashing blend of bluegrass rock, electronica, calypso, country, funk, jazz, Latin, and reggae sounds. The group’s expansive stage productions, which often involve audience participatory activities, are as fiercely original as its music.

This much was readily apparent on the band’s recently concluded March Madness Tour, which featured an eruptive Andy Cass-designed lightshow. True to String Cheese Incident form, Cass’ lightshow was heavy on audience engagement, something the LD achieved with help from a collection of 15 STRIKE 4 LED blinders from Chauvet Professional that were supplied by Upstaging.

“The STRIKE 4s are super intense, which goes with the energy level of our show,” said Cass. “Ironically, I was going to go with older incandescent style blinders when Upstaging showed me the STRIKE 4s. I was sold on them for a number of reasons.”

A key “selling point” that convinced Cass to add the STRIKE 4 fixtures to his rig was their warm white output. “The colour temperature and the tungsten look of the fixtures is great all throughout the dimmer range,” he said. “It’s nice when you light the crowd in warm white light; the look becomes more engaging.”

During the course of the 10-city March Madness Tour, Cass also was impressed with the responsiveness of the STRIKE 4 fixtures. “The main reason I prefer an LED-based product like the STRIKE 4 over a conventional one is that there is no fade time inherent in the heating up of the element,” he said. “If I want it to emulate a conventional unit I can add a dimmer curve to it, but having the option of turning it on with no fade and running effects without the fade time inherent in the bulb is a great benefit.”

Cass flew most of the STRIKE 4 fixtures on overhead truss to use them as audience blinders, reserving a few (the exact number depended on the particular venue) for positioning on the upstage deck to achieve a “backlight through the backline shot” during quiet moments of the show. He spaced the overhead STRIKE 4 units evenly across the entire rig to get the widest light spread on the crowd.

“Given the output of these fixtures I had no problem covering the crowd with just a few units,” he said. “One of the cool photos we get every night at the end of the show is of the entire crowd standing up and cheering, so it’s nice to light this up well.”

Controlling his rig with two grandMA2 full-size and a grandMA VPU+ to run video, Cass and his assistant Cassady Halloran created a wide variety of original looks on the tour. “Our rig, like the band itself, had to cover a lot of bases, from EDM to bluegrass to funk and more,” he said. “We had to be able to transition from one look to the other quickly. Every element in the show had a very specific purpose. When you add the video and live camera feeds we had on this tour, every show was an all-encompassing experience.”

Fans would expect nothing less from a String Cheese Incident concert. After 20 years of touring, 10 albums and 6 DVDs, this innovative Jam band from Colorado still knows how to bring it.