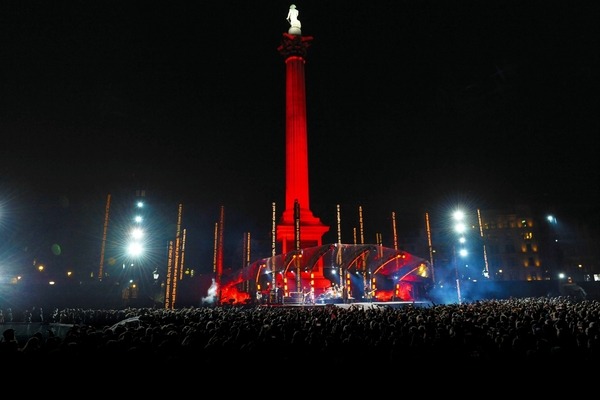 U2 premiered material from their album Songs Of Experience, at a free show for 7,000 fans in London’s historic Trafalgar Square on 11 November 2017, supported in the production department by Stageco.

Introduced by the Mayor of London, Sadiq Khan, MTV Presents Trafalgar Square was the curtain-raiser to the following evening’s 24th annual MTV Europe Music Awards (EMAs) at The SSE Arena, Wembley, where the Irish 4-piece were honoured with the coveted Global Icon award.

Both events were graced by Stageco’s dedication as staging provider with Wim DeWolf and Mario Dockx handling the R&D, while Dirk De Decker managed both projects. For the U2 event, the Stageco crew of 7 [plus local crew], headed by Stefaan Vandenbosch, negotiated one of the busiest tourist areas of the city to erect the company’s now-classic transparent canopy roof. The choice came directly from the event’s production manager, Chris Vaughan, who successfully implemented the product on other events earlier in 2017.

“Organising and co-ordinating some 20 trucks to come on to one of the busiest squares in one of the busiest cities over the course of a few days is quite a challenge,” said Chris Vaughan, who had to interrupt load-out for eight hours on the Sunday due to the Remembrance Day commemoration.

“It has to be one of the largest productions ever staged at this venue, certainly within the timeframe we were working to,” said Dirk De Decker, who worked with the EMAs’ Production Manager Maggie Mouzakitis throughout the project.

“The extent of the real estate taken up by the production was so vast that there was only about 7 or 8 metres of backstage space left behind the video screen, so there was no other option but for us to raise the arena floor to a height of five metres,” continued De Decker. “This provided the opportunity to incorporate hydraulic lifts within the stage and ‘subterranean’ tunnels that allowed production to be raised into position via the lifts, as well as enabling quick artist changeovers.”

Under crew chiefs Patrik Vonckx and Stefaan Angillis, a workforce of 17 – as well as extra labour from Stageco Nederland – was spread across 3 teams in full day and night shifts to ensure that the set was built and ready within 3 days. Stageco’s brief also included the building of numerous camera platforms, relay screen positions in seating blocks, the front of house risers and a ‘glamour pit’ for VIP guests. Julio Himende who has a long history with MTV’s live productions delivered set design for both events.