Legendary Ibiza nightclub, Space, sadly closed its doors in October after a 27-year party history. The name dominated the white isle’s clubbing experience, and was a must-visit venue for any passing raver. Thanks to a sterling send-off with the audio expertise of Funktion One, partygoers were given a sonic experience to remember. TPi flew to the Spanish island of dance music culture for the exclusive, end of an era story.

When Space first opened in the summer of 1986, no one could have prepared for the global reputation that was about to unfold. Three years after its inception, Ibizan nightclub owner Pepe Rosello took charge and soon became the face of the club. The who’s who of the DJ world began to take notice, with the likes of Alex P and Brandon Block and, more recently,  Carl Cox became synonymous with the club. When Rosello decided to move on, Cox followed suit, resulting in a 22 hour party made possible by over 40 DJs both inside the club, and in its outdoor production area.

A space within the Space phenomenon that was streamed live online as a 7,000 strong audience partied on the tarmac. Bringing the sound of a 27 year reign to a close fell to long-time technical associate, Funktion One. Namely the company’s audio wizard, Tony Andrews.

THE SOUND OF A GENERATION

Funktion One’s relationship with Space goes back to 2004, when, at the recommendation of We Love Space on Sundays’ Darren Hughes, the first of the company’s loudspeakers were installed in the club’s Terrace area. Over the subsequent years, the takeover continued until every room of the iconic nightclub was home to Funktion One sound. This has been a special relationship, built on trust, pioneering audio and the freedom to experiment.

As that friendship grew, so too did Funktion One’s involvement in the Space Opening and Closing Fiestas. These events grow the venue’s normal indoor capacity (5,000) to 12,000 as the venue utilises its carpark outside. The result is a technical transformation. In 2016 this outdoor area hosted the closing party to end all closing parties, giving the club’s 27 reign a fond farewell.

For Funktion One founders, Tony and Ann Andrews, Space’s development has been of personal significance. Their connection with the people behind the iconic brand, such as Rosello, and renowned DJs Carl Cox, Richie Hawtin and Nic Fanciulli, this stretches far beyond the standard business relationship. For a start, if you’ve ever had the pleasure of meeting Tony, you’ll know he was born with an insatiable need to invent; a need to push new boundaries and beat new paths. Over the last decade and more, Space has given him the freedom to express himself and develop new pro audio products.

Speaking a couple of years ago, he said: “It’s somewhere we can try out new things, and we do. Space gets some of the newest ideas first. In that respect and for many other reasons, it is a very important venue for us.”

That experimentation continued right up until the curtain fell down on the legendary nightclub. On 26th August 2016, the drawings for the outdoor stage at Space’s final Closing Fiesta landed in Tony’s inbox. He noted that the outdoor area would, this year, be 25m longer than ever before, taking it to over 90m long and only 23m wide. From an audio perspective, this presented somewhat of a challenge.

“I looked at the plans and deciphered that the outdoor area could be broken down into two zones,” explained Tony. “We had to look at the extra 25m and thought carefully…. It couldn’t just be a case putting more main system up because noise complaints do happen in Ibiza. We immediately started to think about how we’d deploy delays.

“We initially decided that we’d use Vero for the main system and as delays, but about a week before we were due to go to the site, it transpired that the towers for the delays wouldn’t work with the surrounding VIP areas, so we re-visited it and settled on Evos instead. This meant adding a second line of delays to ensure another VIP at the back had plenty of coverage.”

A column of two Vero V315’s and three Vero V60’s were ground stacked at either side of the stage. Tony decided to split the bass and sub-bass – a technique that he has been deploying to great effect on recent projects. This avoids conflicting sources, resulting in smooth – and even – bass coverage. This meant a left-hand stack of four Funktion One F132 sub-bass enclosures and a right-hand stack of 12 Funktion One F221 bass enclosures. All of the Vero speakers were powered by Lab.gruppen PLM 20K44 amplifiers, operating over a Dante network.

The first set of delays was positioned about 40m from the stage. These flown arrangements comprised two Funktion One Evo 7T’s together with two Evo 7TH’s (Touring High-Pack). “The THs were positioned so that they were a mirror image of the Evo 7T’s below. That way we could get maximum coherence,” explained Tony. A stack of five F221’s was also positioned at this delay point, on the left-hand side. A second set of delays, consisting of two Evo 7T’s on either side, was installed at the back and aimed at the raised VIP area.

Delay speakers were powered by five XTA APA-4E8 amplifiers, all connected by Dante. XTA’s Richard Fleming was on hand to tech the delay system. Commenting on the amplification and processing, Tony said: “The APAs were very good. We were using Dante everywhere, which is a huge benefit. Whether we’re talking about the APAs or the PLMs, the fact that they’ve got all the processing on board means that all you need to do is send the network cable to the amplifier and you get all the control and signals you need. The Dante networking made life much easier from the point of control and everything else.” A Lab.gruppen LM44 was used to connect the main system network with the delays.

“After the success of APA and the prise for sound quality they garnered at the opening party in this very carpark, it’s great to get them out again on Evo for the closing event. APA has been used in the main room at Space this year as well, and their immense reserves of power and adaptability with their new support for FIR filtering should mean we can fully support Vero systems in the future.”

Timing the system correctly would be fundamental to this set-up working. The audio crew, which also included Thöne und Partner’s Michael Thöne and Lucas Gripshöfer who shipped Vero from Germany and Audio Feed’s Oz Jefferies, spent almost five hours dialling in the system to ensure that sound held together. The result was flawless.

Before 7,000 people poured into the audience area of the outdoor stage, it was possible to walk in a straight line right up the centre of the space. An opportunity that was helped by the fact FOH had been pushed off to the side for health and safety reasons. Though the FOH position wasn’t ideal, being able to walk the full 90m from front to back, for the most part with your eyes closed, was hugely enjoyable.

This system was so together and so even that it was impossible to tell (without looking) when you entered into a new zone. From the front right to the back, the sound was present and with you. When, during the sound check, the sound guys put on ‘Ramblin’ by Rico Rodriguez, the space and dimension, and the detail of each instrument was breath-taking.

Tony commented: “The more real and true the speakers are – and that’s a huge subject – the better things can be. Obviously it’s got to be spectrally correct, but there’s way more to it than that. It’s the speed, transient ability, the intactness and everything lining up. Then it starts to change from being a smear of paint on a wall to something with depth.

“If you’re looking at a pond on a windy day, you see the water but because the surface is all chopped up the surface is the only thing you see. When it’s calm and still, you can actually see into the water and appreciate the scale and detail of what lies beneath. I think that is difference between Vero and everything else that’s out there – it allows you to get the depth, the dimension and the separation.”

Throughout the night, Tony was often seen mixing the show behind a Yamaha CL5 console at FOH.

A crew of 40 technical and structural staff worked for eight days during pre-production and set up. The production’s visual feat – three trucks worth – included 90sqm of LED video panels, 161 pieces of truss structures and utilised around 100 lighting fixtures, primarily of Robe and Clay Paky origin. The lighting design was created and operated by Eduardo Valverde who opted to use a ChamSys Magic MQ100 console.

It’s fair to say that the Space Closing Fiesta went down in the history books, for the club, for its loyal corwds and for the expert teams who brought the show to life.

Kurro Zamora, Production Manager and Event Manager, Ivan Andrades Turon both from Artprotech spoke to TPi about the farewell event. Andrades Turon stated: “It was truly was amazing. After working for a decade on the opening and closing parties at Space, this final event was nothing short of spectacular. It brought together everyone who had been involved with the club over the last 27 years, which, as you would expect, created a very special energy and vibe throughout the duration of the party. It couldn’t have been any more perfect for us. ”

MC2’S Richard Fleming gave his final thoughts: “Where will I go for my holidays now? Seriously though, whilst it’s a real shame that this amazing clubbing institution is closing its doors, it is going out on a mega-high. I don’t doubt there’ll be a bigger and better Space very soon…” 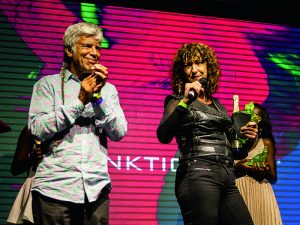 On October 3, Funktion One was the recipient of another prestigious accolade, the DJ Awards’ Cutting Edge title. The award was received by Ann and Tony Andrews for the manufacturers’ ability to push the realms of live sound and bring new depth and dimension to the clubbing experience for both the audiences and the DJs. Congratulations team!

Genesis uphold their stellar live reputation with The Last Domino?