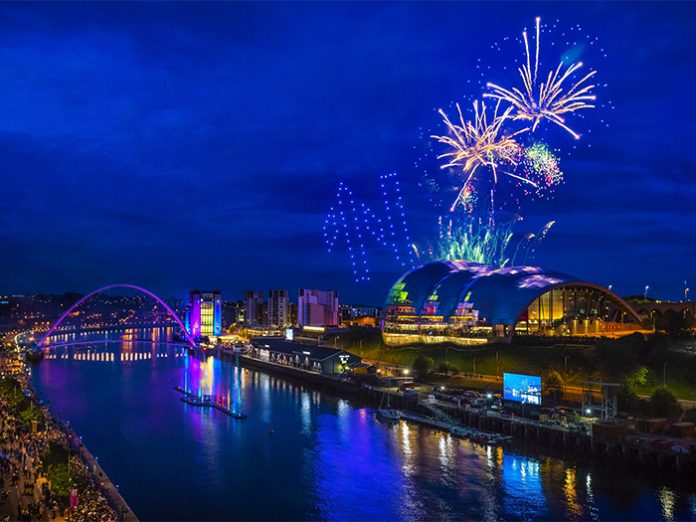 Equipment hire and events company, SLX provided the complete audio and lighting production package and crew for The Great Exhibition of the North’s Opening Ceremony, while Luminex GigaCore network switches provided a dual redundancy network for the event along the Tyne River.

More than 18,000 people lined the Newcastle and Gateshead Quayside for the opening ceremony to launch the festival, which celebrates the scientific and artistic achievements of the North of England.

Audio Hire Manager Rob Collett, who oversaw the event’s hugely ambitious audio & lighting production requirements, had been looking to invest in a high quality, easy to use network switch with Ethercon and rugged fibre connectors. After being impressed with SLX’s stock of Luminex’s Mk1 nodes, he decided to invest in ten of the brand’s GigaCore network switches.

He commented: “We chose Luminex GigaCores for several reasons. We wanted to invest in a network switch which we knew other people had, so we could sub-hire them in if we needed to, and use an industry brand which was widely recognised, with a reputation for high quality. Also, we needed a product that was simple for any of our freelancers to pick up in an instant – and they really did on this event. The software is great, so you can see if someone 1km away is plugging in the right socket.”

SLX configured the Luminex GigaCores in groups, utilising the Dante audio protocol for primary and secondary feeds to the L-Acoustics amp racks connected to 140 speakers along both the Newcastle and Gateshead side of the Tyne. LA-Net was used to monitor the status of all amps, plus Shure Wireless Workbench to monitor the RFL signal level on board a boat from which live music performances were relayed to the audio system. In addition, Art-Net was used to feed DMX lighting data over Ethernet between the lighting control console and the various fixtures.

Collett concluded: “The Luminex GigaCores and fibre networking system saved us a lot of production setup time. If we hadn’t used this Ethernet network, we wouldn’t have been able to have control of all the lighting and audio production from just a single front of house location as we’re limited to 100m of copper data. It also enabled us to have perfect synchronisation of the lighting and audio with the fireworks and fountain display using timecode. As far as we’re concerned, nothing is as simple and yet stable as the GigaCores.

“The service and assistance I received from Peter Loosemore at Luminex’s exclusive UK dealer, A.C. Entertainment Technologies, was great, and he kept me up to date with delivery times for my complete peace of mind.”