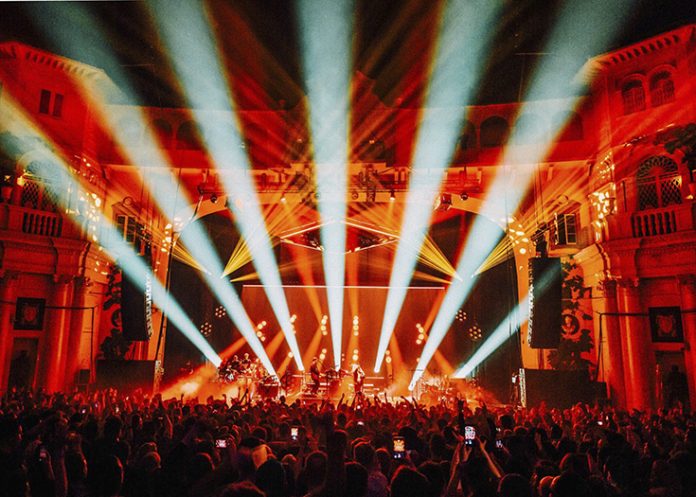 Simon Horn never worked with Maribou State before, nor had he ever seen the multifarious electronic music duo live when he signed on to light their sold-out Brixton show.  Once he became involved with the group, however, he was quickly taken by their supple, infinitely complex sound.

“I fell in love with their music from the word ‘go,’” he said.  “I can only describe them as being to electronic music what Queen was to rock, with high-energy rhythm, mystical deep moments and dramatic charm that takes you from having the hairs stand on the back of your neck, to shedding tears of love.”

So inspired, Horn, the owner of Purple Lighting, used his ChamSys Stadium MagicQ MQ500 console to power a light show that captured the elusive essence of Maribou State’s music by serving up a seemingly endless array of big multi-faceted aerial effects that flowed across this entire rig with every evocative note. The fit between sound and illumination was so tight, that Horn’s “single show” quickly led to him lighting the band’s Kingdoms in Colour tour.

For Horn, the music of Maribou State is a fertile incubator for his design vision. “I am all about creating drama and movement in the air by not actually wobbling fixtures, but by creating pulse and chase effects in different arrangements and in different orders across the rig,” he said. “Just because a fixture can move doesn’t mean it has to. I can create a sense of movement by doing something as simple as having the beams on the X Bars punch through at different times. This tour is providing me with a wonderful opportunity to demonstrate my design philosophy. The band was very keen on moody dramatic looks and was open to thick smoke and silhouetted moments. It was an LD’s dream come true to be so dynamic.”

Like all creative visions that come to fruition, however, Horn’s ambitious design for the Kingdoms in Colour tour had its share of demanding twists and turns. He credits his MagicQ MQ500 with helping him achieve his vision for the show. For example, he relied heavily on his console’s Group Based Effects feature to create a fluid sense of motion without having his fixtures themselves actually move.

“I used the Group Based Effects often to adjust the way different effects were applied,” he said. “The group based pixel map effects were great fun too, as they helped me apply multiple effects over each other. This made for some great intricate moments across the X Bars. There was a lot of pixel mapping in this design, so I depended on all of the ChamSys Pixel Mapping features, both the main pixel mapper and the group grid based pixel map.”

The speed of the MQ500 also was important to Horn. “This is an incredibly fast console to program on,” he said.  “With the large screen, I have access to groups while still having instant access to colour and beam palettes.  I built a large number of groups to give me quick access to a variety of fixture orders. I also broke up the rig into quickly accessible sections. Another thing I love is how easy it is to view what’s in the programmer, cue and palettes.   This makes for some very quick editing when I need to change or remove something I’ve accidentally included.”

Perhaps Horn’s biggest challenge was to integrate video content so it could work together and crossfade between the visuals and the lighting. “I didn’t want the contrast of light and dark to be compromised by having a white canvas in place all the time, and there wasn’t the budget for an LED screen offering transparency, so I elected to project onto a dark sharkstooth,” he said.  “While directly behind the sharkstooth  I had six towers with LED washes and linear blinders.  On the first two numbers, I held back from using them. Then on the third song, they came into play as a massive surprise for the audience.”

Although the vast majority of the show was timecoded,  Horn had some “adlib moments” at the end of sections. He delivered in these instances without missing a beat, relying on the MagicQ’s controllable audio trigger functions. “The audio interface allowed me to select certain frequencies of the audio feed to attack certain values with great accuracy,” he said. “It did things like give me very tight control to bump a cue stack of intensity stabs to this particular set of drum beats.”

With no production rehearsal and no previous experience with the band, Horn “hit the ground running” for his roughly 1000-cue show. “It was very gratifying to see the show come together for the first time after all the programming,” he said. “I’m grateful to Keely Myres of Global Touring Office for bringing the opportunity to me, as well as Lite Up Events for the fantastic pristine equipment, and Ben Cullen Williams for the excellent content. This experience was unexpected, but it is something I will always value.”