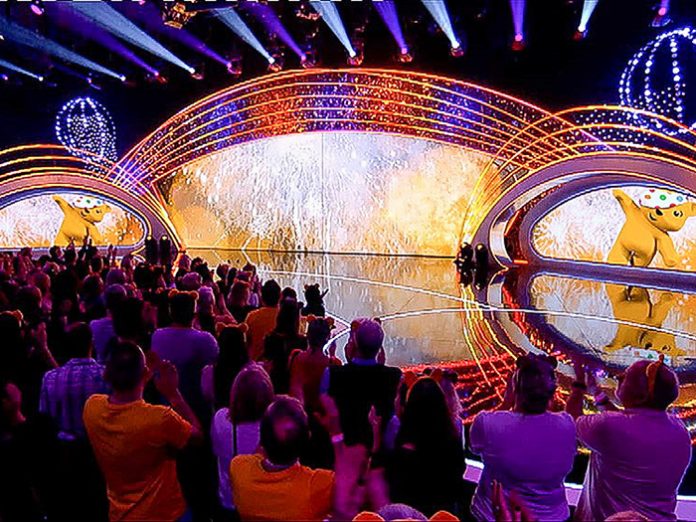 S+H Technical supplied around 350 square metres of its LED Animation cloth and 450 square metres of standard RGB starcloth drape for the BBC’s 2018 Children in Need telethon, broadcast live on BBC One and BBC Two from Elstree’s Studio D.

The star-studded line-up included a diversity of artists, some exciting special performances and cool collaborations. The whole event raised over £50 million pounds for the 2018 Appeal in what was the crescendo of this year’s fundraising activities for disadvantaged children and young people in communities across the UK.

The telethon production design was created by Alex Craig – working on his tenth Children in Need – and this new look for 2018 featured some threads from the previous design to keep a strand of continuity, together with some spectacular new elements including lots of LED and a large upstage LED wall, 14 metres wide by 5 metres high, which split in the middle and opened for performer entrances and exits.

“The look was modern, clean and NOW” explained Craig, adding that his brief from executive producer Leanne Witcoop was to ensure the space looked integrated and a contrast from last year where there were three distinctive different performance areas on the one set.

The stage was all on one level, punctuated with curves and spheres which defined its general shape, complete with the spectacular long multi-layered curved LED screen set piece upstage, finished in gold shimmer disc material and outlined with LED strips.

With this highly reflective and immersive environment, the Animation and Starcloth were a perfect compliment.

The S+H Animation cloth was used as a 180 degree wrap around the studio and behind the set forming the cyc.

The product has high-density, individually controlled LED pixels that can create low-to-medium images, video loops and flash animations, and on this occasion, it was under the control of lighting director Gurdip Mahal and run via one of the show’s lighting consoles.

The RGBA Animation Cloth looked great when the video doors were opening, and it twinkled behind. Due to this positioning at the back of the set and around the studio walls, it also created a great depth to all the camera shots.

The RGB Starcloth assisted in providing a contrasting – but related – aesthetic behind the audience, again providing excellent ‘TV twinkling’ effects, enhancing the depth of the wide audience looks and closer in-audience action shots, ensuring there were never any back-of-shot ‘black holes’ on camera.

“We love these products” stated Craig, “while they have a classic look and feel, they can be used in a totally contemporary context. I have used them every year for the most recent Children in Need telethons and they never date”. He also uses them regularly on some of his other productions.

His challenge on Children in Need is always to provide a setting that is fast-moving and flexible enough to accommodate over five hours of non-stop dynamic programming, ensuring that every section looks different and equally as interesting.

He added that Terry Murtha and the team at S+H do “a fantastic job and an amazing deal for the kit”.

Murtha commented: “We love being involved in Children in Need – great show and idea! Alex’s designs are always innovative and look amazing, and the starcloth and animation effects really look fabulous as an integral part of this style of show”.

Murtha sent an experienced crew for the rig and de-rig and to tech the cloth for the set up and the event.

The 2018 Children in Need telethon was directed by John L Spencer and was another massive fundraising success.