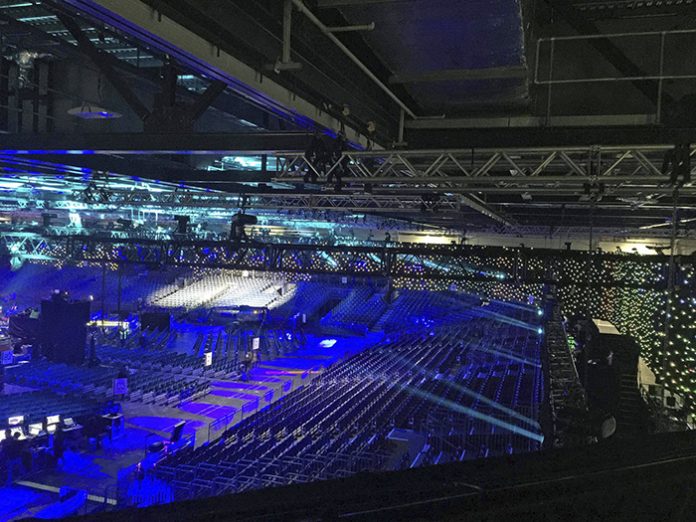 S+H Technical, LED visual effects, drapes and starcloths specialist, supplied a varied array of high profile television shows in the run-up to a bumper festive season, including Strictly Come Dancing, Children in Need and the final of 2017’s X Factor.

S+H’s Terry Murtha commented: “It was great to be working again with many of our regular clients like Strictly and Children In Need, and also with some exciting new ones – it was the first time we have supplied anything to X-Factor, so we were delighted to be offered the opportunity.”

S+H again supplied starcloth for the main hub of the BBC’s 2017 Children in Need live telethon at Elstree Studios in Hertfordshire. Production Designer Alex Craig utilised 350sq m of S+H animation cloth and 450sq m of its RGB Starcloth product, which were an essential element of his scenography.

Craig’s studio set was based on a main performance stage and catwalk, with several large-scale LED screens, each surrounded by a 4-layered pros arch and giant flown in spheres completed the design. The S+H Animation cloth – featuring high density individually controlled LED pixels that can create low-to-medium images, video loops and flash animations – was wrapped around the perimeter of the studio, under the control of lighting director Gurdip Mahal and run via one of the show’s lighting consoles operated by Will Charles.

It ensured that there was never any back-of- shot ‘black holes’ and also could be linked to the colour and movement of the video content and images appearing on the screens and other LED surfaces. These ‘soft’ products also amplified the size of the set, particularly on camera – and gave a full 360° perspective – so it looked a lot larger simply by filling in gaps with a light source, an effect particularly noticeable on wide and moving crane shots. Craig commented: “As always, Terry did us a fantastic deal on the animation and star cloth and sent an amazing crew to Elstree to rig it all beautifully.”

S+H has supported Strictly Come Dancing for the last decade. For 2017, specified by BAFTA Award-winning production designer Patrick Doherty, S+H products were supplied for the weekly episodes recorded at Elstree Studios as well as the Blackpool and Christmas specials.  For the weekly show, over 600ft in total of starcloth was supplied with a 25ft drop, together with around 3000 pea-lights in strings which were integrated into the set. Terry Murtha commented: “It’s been great to be involved with Strictly for so long and to see the series develop over time and increase its amazing popularity. Although there are certain ‘givens’ each year in terms of look and style, there are also new, different and surprise elements which add to the fun.”

For the Blackpool ‘special’ staged at the seaside city’s world-famous Tower Ballroom, another 400 feet of Pea-light strings were supplied to replicate the Strictly signature pea light effect in this different environment. These were overlaid onto 400ft of plum coloured velvet drape which was also used for masking stage and set elements.

And finally, 2017’s X Factor final was staged at London’s ExCeL Centre. Lighting Designer Tim Routledge ordered an 800ft wide x 20ft deep wrap of starcloth to cover 3 walls of the arena, which was sourced via the series’ lighting supplier Neg Earth for the nail-biting 2 final shows. Murtha commented: “We’ve not been involved in X Factor before, so it was brilliant to receive the call from Neg Earth and enjoy seeing our kit used to great effect on the show!”