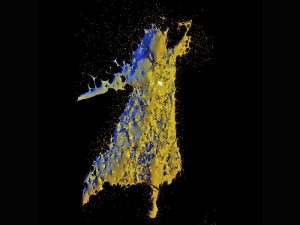 London-based multidisciplinary studio, Satore, has revealed how its Eriya art piece – a holographic tech installation used in UNKLE’s Beyond The Road exhibition – was created.

The musical and art hybrid, which took over the top floor of the Saatchi Gallery this summer, was experienced by the NME: “Two years in the making, this ground-breaking project interprets UNKLE’s ‘The Road: Part I’ and ‘The Road: Part II/Lost Highway’… To step into it is to leave reality behind and enter a bewitching, neon-lit netherworld.”

Visual designer and multimedia artist, Tupac Martir, of Satore Studio and Satore Tech was asked to create a piece as one of 13 artists engaged to bring the songs to life.

Matir commented: “After years of working on UNKLE’s tours, our conversations moved towards aesthetics and new technologies. We started talking about this concept, and once it became obvious that my idea needed to be both a part of their live show and within their art show, we began to explore what was possible. Music is the driving force of the exhibition and of the piece, so it is very important for us to allow the music to create the environment.”

In order for Martir to create Eriya, which translates as ‘to feel’ in the indigenous Mexican language of Huichol, it required the use of Notch software for visual effects and HYPERVSN 3D Holographic Displays were used to create depth. The story depicts the movement of a dancer who is brought into a perceived reality via a technological evolution.