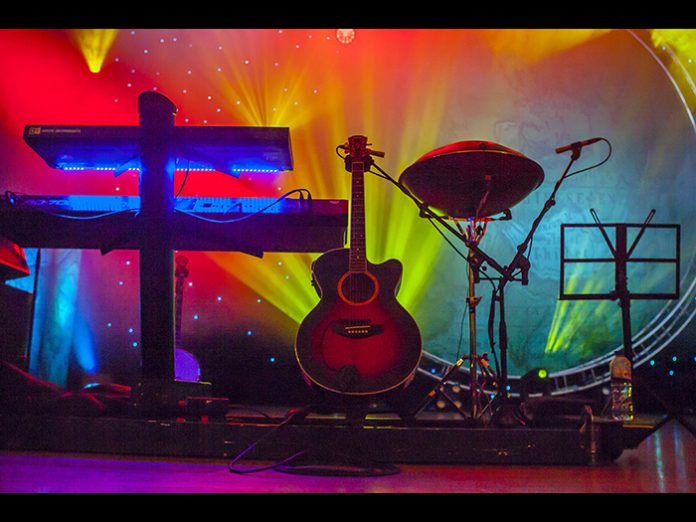 English comedian, musician, singer, actor, TV/radio presenter and author Bill Bailey takes to the road for his latest Larks in Transit tour; first performed in Australia in October 2017, supported by a range of Robe lighting fixtures.

Dave Farmer of THC Design’s, Bailey’s lighting designer for the last 7 years, added Robe to the mix in the form of Robe Spiiders and MMX Spots for the current UK theatre leg of the tour, which kicked off with 5 gigs at Shepherd’s Bush Empire in London over the festive period.

Farmer took a brief from the artist ahead of the tour, and that was to make it simple and stripped back. He didn’t want any video, rather favouring a classic stand-up ambience onstage, with all the focus on him and his routines.

Lighting is crucial to a comedy show, and although many theatres and arena comedy shows have to rely on at least some element of IMAG video to get the artist up close to everyone even if they are at the back of the room, doing a tour without it was a refreshing departure and also meant increased pressure on lighting.

Farmer took the backdrop they had used in Australia as a scenic starting point for the visual design. Originally this was a map of the world, which he re-imagined as a scenic circular globe suspended inside a circular truss and fitted into a cut out backdrop. This brings an authentic 3D impression to the stage and to the audience, it looks like a complete globe. Further upstage is a starcloth to add a bit of magic and sparkle and help the globe appear to be floating in space!

A lot of the routine and subject matter involves tales from Bill Bailey’s trips, travels and adventures around the world. Farmer added 4 vertical trussing towers to the design using the original backdrop artwork from Australia to provide a consistent theme across all set objects. The lighting provider was Sonalyst, so there was an inventory of Robe available to facilitate Farmer’s design.

Shepherd’s Bush Empire and some of the other venues are tight for flying, and although they did manage to fit in the globe for the London showcase, Farmer wanted compact, powerful fixtures that would work in the more challenging spaces as well as on the larger stages and suit the innate adaptability of the design. The primary reason for picking Robe Spiiders and MMX Spots.

The tower metalwork is highlighted on 3 sides by Satellite LED ‘bricks’ and they also have 2 FOH follow spots on the road. Farmer likes Robe Spiiders for the brightness, small size, light weight and excellent colours. Two are positioned – via angled pipes inserted in the truss – at 8ft high around the circle, 2 at 18ft, and the fifth at 20ft so all are close to the artist. They are running in the simplest mode as individual pixel control was not required.

“They are a really good, solid LED wash light” he commented. The MMX’s – even though they are an older fixture – he still loves the gobo selection and animation wheel, used for creating some subtle and intricate effects and for atmospheric looks. “It was essential to have small lights on the circle to avoid them fouling the drape”. Larger fixtures would also have had to be hung farther forward which would have made flying and balancing the truss more complicated. In fact, it’s probably the least amount of lights he’s used on a show for a long time, but both the design and the choice of luminaires is a testament to the successful application of the ‘less is more’ principle.

Lighting was run from a Hog 4 console being operated for the tour by Chad O’Grady and Dave Baxter is the technician. Farmer is delighted with the design and the 3D effect, and everything got off to a cracking start after the first week with plenty of positive feedback and comments from fans via social media and some great press reviews.