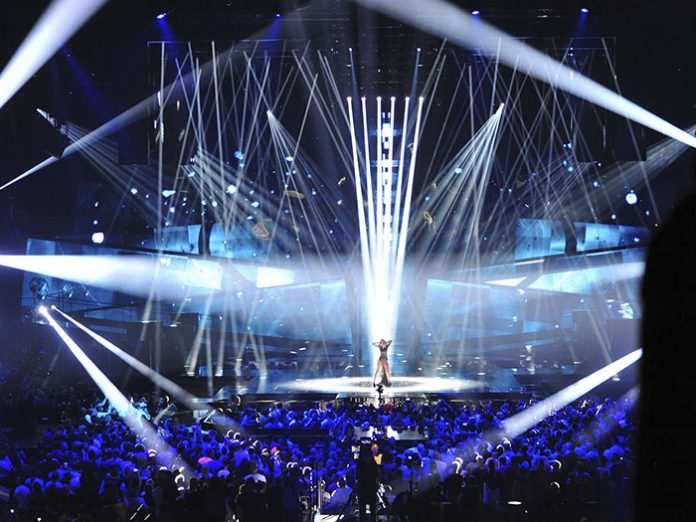 Robe BMFLs entered unchartered territory when Fredrik Jönsson, Lighting Director responsible for creating the visual production design for Eurovision 2016, selected 88 BMFL Blades and 6 BMFL Spots to light up his show, which was to be televised to a 180 million audience worldwide.

Eurovision 2016 was to be staged in the Globe Arena, Stockholm and Jönsson identified the BMFLs as an essential tool for lighting in the show. “The BFML Blade fitted my specification to the mark, hence their presence on the rig,” explained Jönsson.

As the Globe Arena is the largest spherical venue in the world, Jönsson needed a fixture that was bright enough but could be precisely shuttered and that key-light fixtures preserved site lines.

Jönsson needed the brightest fixture possible to cover all the video elements in the stage and set (900 sq metres) and Robe’s BMFL was the only feature which could deliver such brightness to cover the dimensions of the venue.

The BMFL Blades were positioned to give two levels of key-light – the first row of trussing was immediately in front of the stage and very steep. The second row of units were rigged further into the auditorium and also doubled as key-light for the extensive green room area.

The BMFL Blades were positioned on three side ladders, which were on motors and moved up and down throughout the show throwing approximately 16 metres to the stage. These were invaluable for getting side light onto stage for artists, dancers and the various props used in the different performances. The beams could be tightly shuttered to avoid spilling onto some of the upstage projection screens when they were in use for certain songs.

Jönsson utilised the six BMFL Spots as rear follow spots with the handles added to the bodies. “They are so powerful,” Jönsson explained. “They can be a big punchy beam light one minute and a potent soft-light the next, and the CTO and colour system are also excellent.”

“The BMFLs were really worked hard throughout the entire event in a multi-purpose context,” concluded Jönsson.