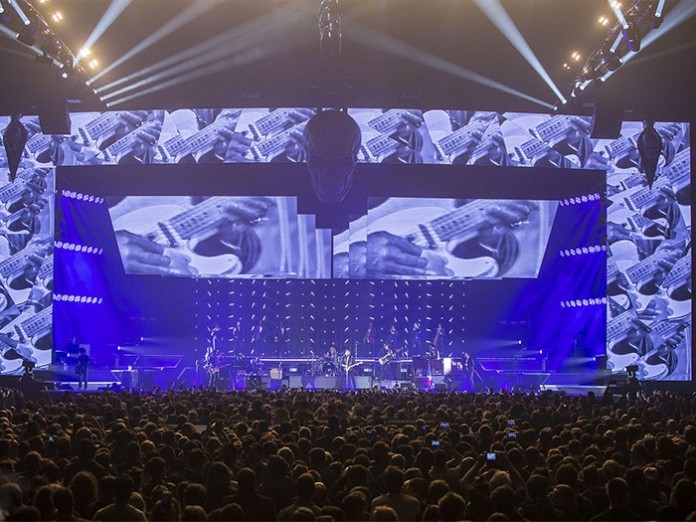 Among the first live concerts to be staged in Paris after the November 13 terror attacks were three emotionally charged shows at the AccorHotels Arena by French musician, Johnny Hallyday.

The Paris dates were part of the current Rester Vivant (Staying Alive) tour and French Lighting Designer Dimitri Vassiliu brought his experience and imagination to create the ‘big rock show’.

The design featured 36 Robe BMFL Spot moving lights on the rig, supplied by lighting contractor Dushow who had invested heavily in Robe in 2015. For the AccorHotels Arena performances, an additional 20 BMFL Spots were added to the rig to light the audience.

This was the first time that Vassiliu worked on a Johnny Hallyday tour, asked on board by the Halladay’s management team to bring fresh creative perspective to the maverick stage show.

Vassiliu in turn assembled a creative team which included scenographer Emma Favre and video content producer Peggy M, who added their own ideas to the multi-layered visual equation, which involves moving video screens and scenic elements. He was also very involved in commissioning of the video content.

The BMFL Spots were positioned on the front and over-audience trusses for lighting the audience and the B-stage in the middle of the room. There was also a ring of them around the deck of the main stage, where they were mounted on different level plinths and used for aerial effects and for skimming low across the audience

BMFL Spots were a new light for Vassiliu, so after initially seeing a demo at Dushow, he then used 10 of them on one of Hallyday’s summer festival performance to make absolutely sure that they would do the business on the tour

He admitted that he’s not yet had the time or chance to explore the vast amount of looks and possibilities offered by the BMFL, but he did report that they “work brilliantly for the overall look and feel of the lighting; a sophisticated blend of vintage and modern”.

He said: “The biggest aesthetic task on the tour is creating that mix, and using all the different technologies involved to look simple and retro one minute.”

Lighting and video was run across three consoles: a High End Systems Hog 4 operated by Vassiliu together with another one run by Stéphane Chiron, and an MA Lighting grandMA2 light operated by Philippe Marty triggered a Catalyst media server running playback video to the six moving screens and a digital pros arch that surrounded the stage.