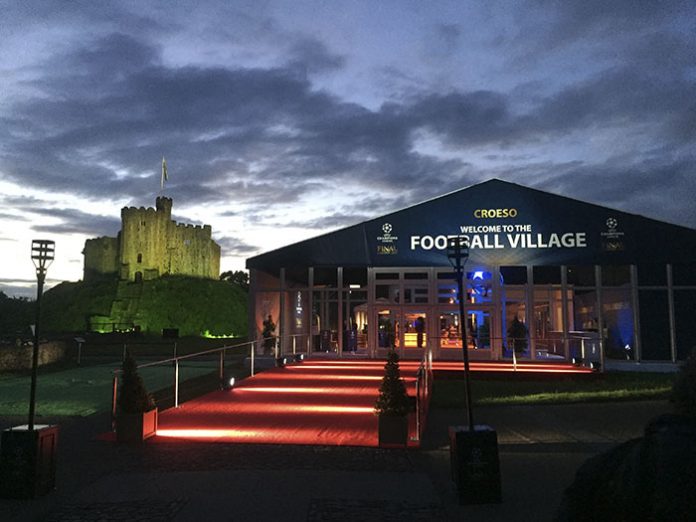 Many months in advance of the final, Cardiff-based Event and Project Management specialist, 11th Hour, was engaged by the organisers to provide a wide range of services across the city to support the infrastructure necessary to accommodate the influx of fans and the various satellite events surrounding the occasion. 11th Hour are no strangers to co-ordinating and supplying large events but as Founder / Director Andy Hopkins points out, the demands of The Champions League final were rather formidable:

“It’s probably not overstating the case to say that when one of the items on a clients wish-list is to supply power and lighting for a floating football pitch in Cardiff Bay, you can be sure that you’re in pretty demanding territory. That said, meeting any scale of requirement is exactly what we’re set up for – by the time we had the entire brief for the job, our teams were relishing the challenges.”

Those challenges were many and varied. The UEFA Football Village which catered for 2000 hospitality guests was located at Cooper’s Field in Bute Park, adjacent to Cardiff Castle. Here 11th Hour supplied more than 100 MBI Floods for all back-of-house lighting and six generators to supply power for the lights and production power. In addition the company supplied safety lighting for the wider park and surrounding areas.

In Cardiff Bay itself, 11th Hour supplied the power and lighting for a floating football pitch based on pontoons brought in from The Netherlands and supplied by Van Hameren Verhurr BV. The pitch itself hosted a number of events during the four-day period it was open, including learning disability and age-group youth games, refugee teams from Cardiff, Swansea and Newport, walking football and a deaf football friendly international. Footballing legends like Luis Figo and Ian Rush also took to the pitch to relive their glittering pasts in front of huge crowds. As temperatures in May soared, an 11th Hour team comprising Director and Engineering Expert John Davies and Assistant Project Manager Martin Stanbury took to the water in an RIB to begin the installation. They began by fitting custom-fabricated steel base plates, designed by John Davies and Total Solutions. These supported 4 x 8m GS Slick Truss Masts that carried floodlights for the pitch. John Davies takes up the story:

“An absence of many rigging points on the pontoon required the design and manufacture of custom square washers and custom tools to attach the custom-made plates. Having done all the structural calculations, the plates and masts were designed to cope with flexing/overturning forces of both high wind and water movement. We also had to custom-fit the handrail system on the pontoon to accommodate the truss masts. A lot of the work, operating out of a boat alongside the pontoons, was quite precarious but we overcame the challenge and the masts certainly stood up to the great British weather and dare I say, the motion of the ocean that is Cardiff Bay.”

The lighting for the pitch comprised eight Metal Halide flood lights and eight weather-proof, moving SGM G-Spots. Twelve Martin 401 LED architectural fixtures were used to ‘truss-tone’ the masts. All electrical power and distribution around the pitch, as well as a PA for the surrounding viewing areas, was also supplied by 11th Hour. The Oval Basin, adjacent to the Bay itself hosted the Champions Festival, 4 days of events centred around a stage that featured artists as diverse as Cerys Matthews, DJ Steve Aoki, local bands and a Welsh Choir.

On the main stage itself, 11th Hour supplied stage lighting, using Claypaky and Robe fixtures, whilst in the wider vicinity the team supplied three megawatts of power to event partners Playstation, Nissan, Mastercard, Gazprom, Sony, BT and Pepsi, across numerous locations. In all 11th Hour installed 20kM of cabling and 700M of cable ramp in this area of the project. Cardiff City Hall provided the backdrop for ESPN’s broadcasting of the event to Argentina. 11th Hour erected a 10 12M CLT Stage on City Hall lawns which acted as a temporary TV studio and provided power – via two 100Kva Sync Set generators – distribution and site lighting. This three-day build went smoothly on territory very familiar to the 11th Hour team which has operated a number of diverse events on that particular site.

The action in the city centre, close to the stadium brings home the extent to which there can be no substitute for the level of experience, expertise and sheer adaptability under pressure, displayed by the team. The brief was to provide fencing and barriers – Heras and M.A.S.S – for a number of areas in the city centre and Bute Park, to support crowd management and create cordons for VIP areas etc. In total, almost 5kM of fencing/barriers were installed, transported in and out by 13 articulated lorries. Security was extremely tight, access was restricted and in some areas that could not support plant and machinery, or where access was tight, the manual handling of large quantities of materials was the only solution. In Bute Park, the team had to overcome slopes, trees and many unusually-shaped areas, whilst in the busy city centre, working next to the general public demanded extreme care and much patience. Project Manager, Kirstie Evans said:

“This was a tough assignment. Taken individually, each of the tasks could be viewed as being straightforward – collectively, they were anything but. The dramatic changes in the weather, from gale force winds and hail to soaring temperatures, didn’t help but they took a back seat to the state of flux in which we had to operate. Adaptability was the name of the game from the outset. We were working alongside other contractors who were simultaneously installing and removing equipment – all against a backdrop of incredibly tight security. Road closures were brought forward as security threat levels changed, reducing our windows of opportunity and requiring flexibility and understanding on the part of hauliers and suppliers. The good relationships we’ve forged over the years really came to the fore under these pressures.”

It is worth pointing out that many essential functions in less high-profile areas also proved key to the success of the event. A good example of one such area was Splott Market, a popular trading area near Cardiff Bay which was used on the day of the match as a drop-off and pick-up point for coaches. 11th Hour supplied 175M of fencing and 230M of pedestrian barriers as well as portable toilets, seating, power generation, emergency lighting, public address system – by Rees Sound – and all temporary electrical distribution and certification. Although in relative terms, a straightforward installation, it was complicated by the market remaining operational on the days before and after the event. The turnaround time to clear the site on the day after the match was achieved in good order, enabling normal trading to resume unhindered.

The UEFA Champions League Final was the single biggest sporting event ever to take place in Wales. When Cardiff was first named as the host city, doubts were expressed in certain quarters that it would be able to provide the necessary infrastructure to support the huge number of visitors predicted to attend. In spite of the pressures, the event was hailed as a huge success. With feet back on terra firma, Director John Davies looks back on a milestone event:

“We’re very proud of 11th Hour’s involvement in this showcase event. The team responded magnificently to the demands, demonstrating skill and flexibility in some very pressurised environments. At times we had to very much live up to our name but we have the capacity and the know-how to do just that. We’ve recently recruited more key members of staff as we continue to grow the business – The Champion’s League sets down yet another major marker in terms of our capabilities.”