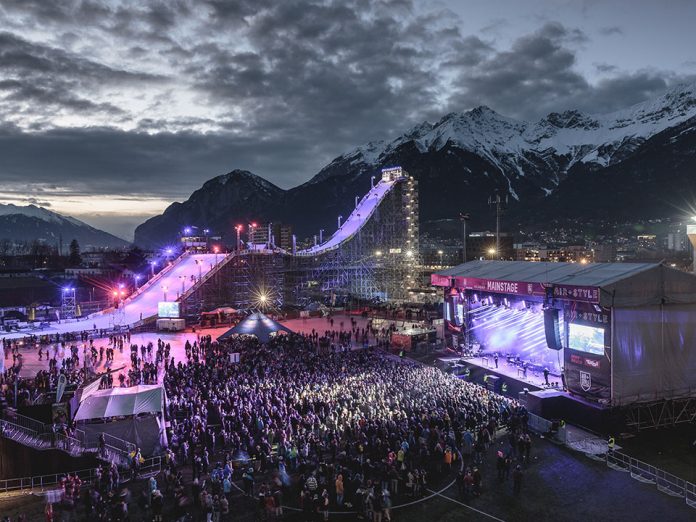 For the last 22 years, Stageco has been proud of its responsibility for building the temporary structures at Air + Style, an international event that has not only created a new environment for winter sports, but also established new disciplines with its original aim to bring snowboarding from the top of the mountain down to an urban area. The combination of sporting action with live music and parties became a trademark, and is still the model for many events worldwide.

The festival successfully changed its location in the Tyrolean city of Innsbruck, Austria last year from the Bergisel Stadium to Olympiaworld, where the already high production values have were raised even further for 2017 along with the introduction of female competitors for the first time.

During the last 10 days of January, Stageco Deutschland’s crew of 50 set up a range of structures for 2017’s two-day event – the 34th edition, held on February 3rd and 4th, such as the iconic, 100 metre long snowboard ramp. Standing 45 metres high and 25 metres wide, the ramp was marginally larger than last year’s model and was created with 310 tonnes of Layher Allround scaffolding.

The crew also built a Stageco 2914 system for the outdoor (main) concert stage adjacent to the ramp – featuring Friday night headliner Bilderbuch and Saturday’s Biffy Clyro, Fünf Sterne Deluxe, The Naked And Famous, Lucky Chops and Beginner – while also constructing four lighting towers along with a number of other scaffold structures.

From Stageco’s perspective, the main practical change this year was the closure of the space between the in-run and landing area, which meant that construction was only accessible with a snow cat.

Coming 10 weeks after its Beijing edition, Air + Style Innsbruck was the second of three stops on the latest world tour, which completed in Los Angeles later in February.