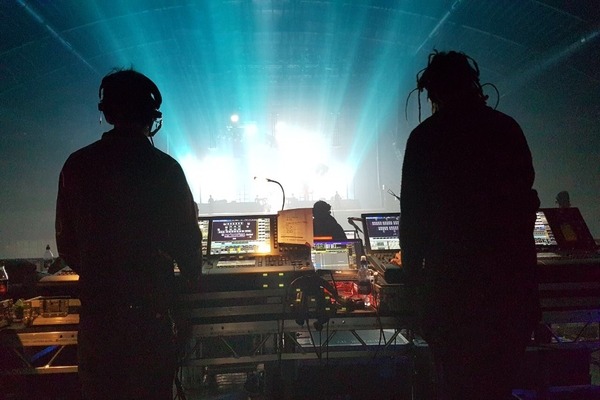 German industrial metal band, Rammstein, has embraced a number of European festival stages with their impressive live show in summer 2017. The 2 lighting directors of the tour, Bertil Mark and Faren Matern, used a total of 4 TimeCore units from the Dutch manufacturer Visual Productions.

Dubbed as a modern timecode toolbox, the TimeCore is not just capable of generating timecode, it also follows, converts and displays timecode. It supports and converts between SMPTE, MTC and Art-Net timecode. It can convert between different frame rates. The TimeCore also handles various non-timecode protocols: MIDI. MMC, MSC, RTP-MIDI, sACN, Art-Net, OSC, UDP, TCP and HTTP. This allows the unit to be triggered by many external signals and devices.

TimeCore can be configured as a timecode master and in this case generates a stable timecode signal. Alternatively, it can also be used as a timecode slave. The LCD display shows the current running timecode in real time and the two push buttons are user-configurable.

“We use TimeCore at the key points of our extensive setup,” explained Faren Matern. “We use the display to show timecode to all the show elements who are reliant on it, including the lighting desk, dimmer city backstage, pyro technician, and cyberhoist technician. The digital display also shows when the TimeCore starts / pauses etc. which is a great feature.”

TimeCore also has a booster function that amplifies and processes the timecode signal to ensure optimal transmission. “The booster function is very helpful in our case, because we have to cover large distances,” continued Matern.

Mark concluded: “We use the timecode generator at Rammstein to test our lines and the system. It helps us make the most of our setup and changeover times. It is also nice that we can assign the push buttons ourselves to adapt the device to our workflows. Overall, the user interface of the TimeCore is super clear and self-explanatory. We are delighted to include TimeCore in the next creative phase!”