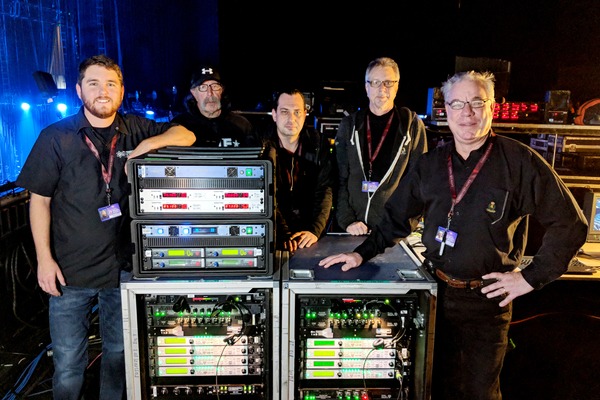 The 18th Annual Latin Grammy Awards is one of the biggest nights in Latin music. Broadcast on the Univision Network, the 2017 show was recently hosted by Jaime Camil and Roselyn Sanchez at the Grand Garden Arena at the MGM Grand Hotel & Casino in Las Vegas.

Since 2005 Univision has tapped Orlando, Florida-based Professional Wireless Systems (PWS) to provide RF coordination and equipment for the live show viewed by 8 million people around the world – and this year was no different.

“RF coordination in Las Vegas is always difficult — coordination for an award show the size and scope of the Latin Grammys is truly a challenge,” explained James Stoffo, lead RF coordinator for the show. “We start weeks in advance, planning everything down to the last channel to ensure the show goes off without a hitch, it was the smoothest Latin Grammys I have ever worked thanks to the outstanding RF team and technical management by Univision’s Mike Karsch.”

In addition to Stoffo, PWS provided RF Intercom Technician Gary Trenda to manage more than 80 users on wireless intercom systems. RF Technician Jason Lambert was responsible for system integration between both inside and outside of the venue, while Jordan Smith managed distribution of all the wireless intercom and related equipment throughout the event.

Trenda, responsible for 100 different intercom related systems located on the concourse level of the arena, manned 8 RAD UV-1G base stations with 50 RAD packs as well as a Riedel Bolero intercom system and a Telex BTR intercom system deployed for an additional 30 users. An additional 16 “listen-only” intercom packs and 8 Comtek IFB systems were utilised by crew and on-air talent.

“The intercom systems were used across 4 coverage zones,” explained Trenda. “Because the RAD base stations minimize their footprint in the UHF spectrum and the bodypacks transmit in the VHF range, we used as many of the RADs as we could. It is the most spectrally efficient UHF intercom product and very straightforward to deploy.”

This was PWS’s first time out with the Riedel Bolero wireless intercom system. The new system operates in the 1.9 GHz band and was utilized by the creative directors and floor managers working in the green rooms and productions spaces. Trenda adds, “The Bolero system integrated seamlessly with the Riedel wired intercom system brought in for the show, making its use very convenient. The users also liked that we could make changes to their pack settings remotely, which is a nice feature.”

Wireless signal distribution was handled by PWS DB Series multi-couplers, GX Series combiners and RAD TX series combiners. PWS helical and domed helical, and the VF-1 antennas were also in use.  Univision enlisted Frequency Coordination Group headed up by Brooks Schroeder and Chad Meise. Their team deployed Clear Com Delta Eclipse Frame and FreeSpeak II, which was used in 1.9 GHz on the red carpet. It was also utilized in 2.4 GHz for the pre-show stand up position backstage to avoid interference with the main shows Bolero system. Lectrosonics IFB and Shure UHF-R kits in multiple band splits were also used, all supplied by Univision.

“During an awards show of this size, it is key that everyone is in constant communication,” concluded Jim Van Winkle, general manager of PWS. “With this much wireless in play, it required a knowledgeable and experienced team. We are fortunate to have this team in place that has the level of expertise that these events require. Once again it was an incredibly successful event.”