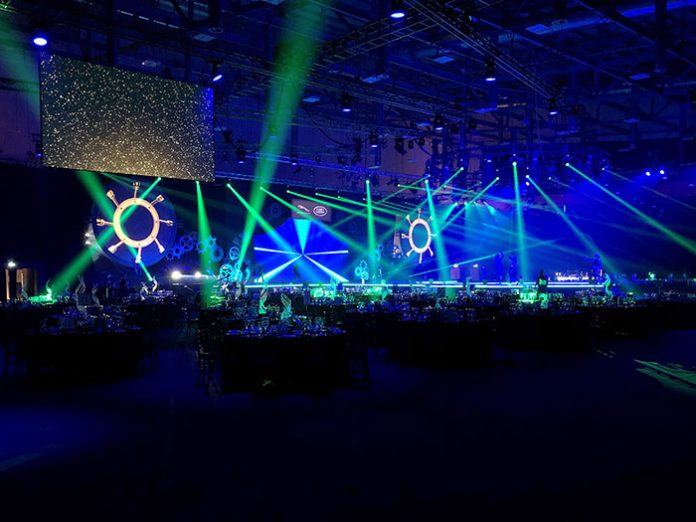 Taking place at Coventry’s Ricoh Arena on 25 and 26 October, the Jaguar Land Rover Long Service Awards hosted more than 2,400 guests, celebrating employees who have given 25, 40, and even 50 years of loyal service to the company.

Protec supported its client, Optimum, for the event, putting together a bespoke audio and video package, working alongside Christie Lites. The two-day event comprised a corporate presentation, an awards ceremony, the showcasing of two new vehicles, live entertainment including singers, dancers and theatrical performers, and a gala dinner.

Production Manager for Optimum, Tony Butler, reflected on his experience working closely with Protec’s Birmingham based team. “Protec has been fantastic on the most recent production for Optimum at the Ricoh Arena,” he commented. “From early planning and budgeting, all the way through the pre-production process and on-site delivery, the whole team have supported me superbly. I can’t thank them enough for making my job so much easier and the client’s reaction to the project says it all. A true bunch of dedicated professionals.”

HOD of Video, Sean Godefroy, explained his chosen video solutions. “Barco E2 was the ideal choice to handle the pixel space of all the content, as there were 4K inputs and outputs and it is incredibly flexible in a show environment,” he began. “We chose a 2.6mm Unilumin LED wall measuring 12m by 5m, with a resolution of 4,608 by 1,920, flanked by two circular side screens using double-stacked Barco 30K projectors to display camera feeds ensuring a vivid, sharp display. We also used two Panasonic 12K projectors for the relay screens, projecting 16:9 content and one DSM monitor for the main presenter’s speech.”

He continued: “For the recordings and camera feed, we used a combination of cameras. We used three studio broadcast cameras – these were two 22x lenses and a 42x lens and two Panasonic HE 140 hotheads. The combination of lenses and location of cameras enabled us to get all angles from the stage, which allowed for brilliant visuals on the night but was also great for the after edit.”

Colour matching three different surfaces was a challenge. However, Godefroy and his team we more than up to the task. “As we had front-lit LED, the side screens were rear projection on short-throw lenses fed via double-stacked 30K HDF Barco projectors and the relay screens were single-stacked front projection on long-throw lenses fed via the client’s Panasonic 12Ks – so there were three different surfaces and display machines,” he commented. “Trying to make them as uniform as possible is always a challenge, but we planned it well and chose the right equipment. All projectors were controlled via network. The four 30Ks were controlled via a Barco toolset to allow constant monitoring of projectors and their alignments. We were very happy with how it looked.”

Ben Waters, Protec’s Audio HOD, explained the client’s brief and his solutions. “The client was looking for a punchy, clear system that both spoken word and a West End-styled performance were equally suited to. For this event, we chose L-Acoustics, using Kara for the main PA hangs, with flown SB18 and ground-stacked KS28 sub elements. For out fills, we used ARCS Wide for the sides of the hall as well as more Kara to improve the dancefloor coverage. Along the thrust, we used X8s as lip fills, and also put in some X8s as nearfield monitors for the visiting engineer – all powered off LA12X amps. To control the PA, we used three Lake LM44 system processors to make sure the whole PA was aligned and sounding sweet throughout.”

For control and networking Waters used Yamaha consoles – “CL5 at Monitors and a QL5 at front of house,” – on a Dante network with Yamaha Rio boxes. He commented: “These are quick desks that are very rider friendly, so the visiting engineer was quickly able to get the sound they wanted.” As for radios, the team used all Sennheiser, both EW500 Handhelds as well as Sennheiser SR2050 in-ear monitors, totalling over 30 radio channels in use. “Playback was triggered over a QLab system consisting of main and back up, which also sent timecode out,” Dante confirmed.

Protec implemented the new Riedel Bolero comms system. “This is a brand-new comms system, which allows high clarity and clear intelligibility of both speech and background program so everyone can communicate clearly and in real time,” commented HOD Ben Waters. “It also is super-flexible, integrating wired comms, and gives a big circuit count on one wireless beltpack. For this event, we had almost 40 people on comms.” Waters explained.

The whole PA was designed in house, by Waters, using L-Acoustics Soundvision. “It allowed us to check the volume at certain important frequencies as well as the dispersion and, very key, show the clients at pre-production meetings expected site lines and coverage,” he recalled. Protec also supplied audio for the reception area, which Waters described as “a very simple room of coverage for voice of god announcements and background music”. He commented: “We chose to use D&B point source speakers, powered by D&B D12 amps, and a Yamaha QL1 desk, again using Sennheiser radio mics for the announcements.”

Charlie Speakman, director of Optimum, praised the Protec team. “My sincere thanks to everyone at Protec for delivering exceptional support,” he said. “It is rare to find such a dedicated, professional and friendly team. At every step, I had 100% confidence that Protec would deliver a fantastic service, and I wasn’t disappointed.”