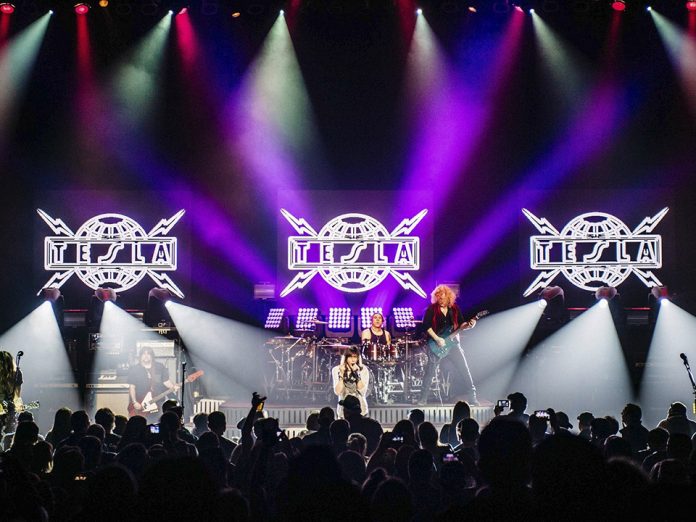 American heavy rock band Tesla has cultivated a loyal fan base over the last 30 years, playing an unpretentious, blue-collar style of music that hard rock audiences love. For an ongoing tour that started in January, band lighting designer and creative director Ignacio “Iggy” Rosenberg is using an Elation rig to complement the band’s big rock sound and surprising (to some) long list of hits.

“The main thing was they were venturing into having more of a production for the first time in years, so we were trying to be cautious about spending too much, but also giving them as much of a show as we could,” commented Rosenberg, who has been working with the band for the past three years. “This was a great tour to understand the concept of providing something that was inexpensive, but not cheap.”

Working from a short production timeline, Iggy chose Platinum FLX hybrid-moving heads, ACL 360 Matrix LED moving head panels and Protron 3K Color strobes to light the show, along with other gear. “They’re a straight up rock band, so much of the lighting tends to follow the drive of their songs,” he said. “That being said, the more they saw and liked, the more freedom they gave me to keep pushing things. They’re a fantastic group of guys and definitely know what they don’t like or don’t want to see.”

What the band does like are the high impact looks from Platinum FLX hybrid movers that Iggy has located about seven feet off the ground on amp carts. “They really have been a surprise since I had never seen them before,” the LD says of the 20,000-lumen multi-functional fixture that can operate as a beam, spot or wash light. “I think they are incredible lights. I am really happy with the light quality coming out of them and they have a really crisp beam and flat field of light.”

Teamed with the Platinum FLX fixtures on the amp carts are Protron Colour LED strobes, which have a varying role in the show. “I pick the moments when I want impact,” Iggy said. “I don’t want to abuse the audience the full show and exhaust them so they live in a pocket at 25% most of the show as a set piece. They just glow with some colour to fill in the negative space and tie in the flown rig with the floor lights. But then they pop up at full intensity as blinders and strobe every now and then.”

Located behind a rather expansive drum kit on riser boxes along with some of the Protron strobes are Elation ACL 360 Matrix LED moving head panels, which the LD says he uses more as a set piece than lighting. “We couldn’t pixel-map them because of the fast turnaround, but it’s in the books for the future,” he explained. “They produce these nice fat beams and fill out a lot of the space in between.”

Supplying the Elation gear for Tesla’s shows is production services company Sure Sound & Lighting of Grand Island, Nebraska, whose Larry Suhr and Jeremy Wann the LD thanks “for putting up with my endless demands.” Tesla will be playing dates across North America through the rest of the year.