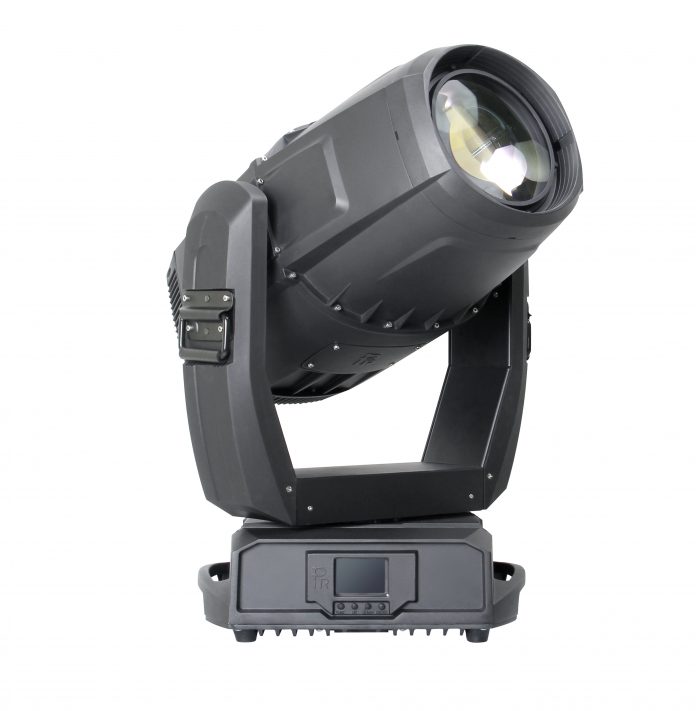 PR Lighting has introduced a new flagship to its popular IP66-rated AQUA range, with the release of the PR-2597 AQUA 580 BWS (combined Beam, Wash and Spot) and PR-2569 AQUA 580 Beam. These made an astounding debut at this month’s Prolight+Sound Show in Frankfurt.

There is a fixed gobo wheel with 18 gobos (plus open), bi-directionally rotatable and shakeable at variable speeds, and a rotating gobo wheel with seven gobos plus open (gobo replaceable).

Further effects include a Prism wheel containing four prisms (standard 8-facet, 9-facet, 4-facet and gradient, with optional 3-facet and 16-facet prisms, bi-directional rotation with variable speeds. There is also an effect wheel which can overlap with gobos and again offers bi-directional, vari-speed rotation, and a Frost filter. The Focus and Zoom functions are motorised linearly and the double shutter blade strobe offers 0.3-25 fps.

Housed in temperature resistant cast aluminium, the fixture weighs 36.5kg. The AQUA 580 Beam offers a similar feature-set, with three prisms (8-facet, 16-facet and 4-facet) with optional 3-facet and gradient prisms, but crucially the light angle is 2°. Control is via DMX512, with 19 channels in short mode, 26 channels in standard mode and 29 channels in extended mode. Both fixtures will be ready to ship in mid-2019.