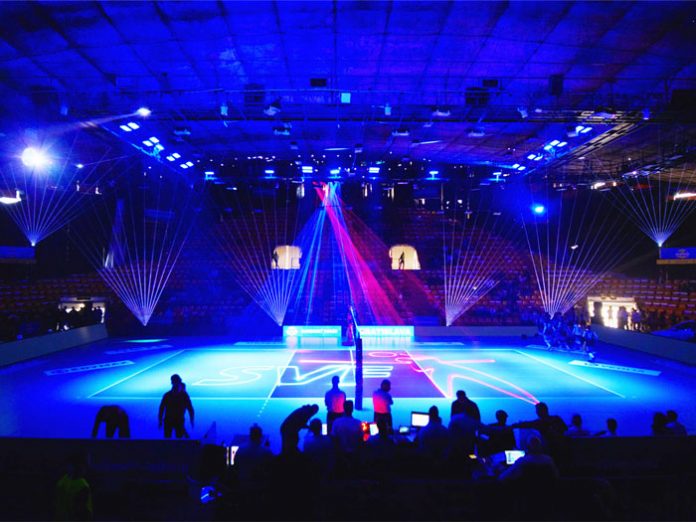 The Slovak Volleyball Federation recently contracted laser specialists, Kvant, to provide a spectacular multimedia show for the Superfinals of the Slovak Cup, at the Eurovia Arena in Bratislava.

The clients were looking for a high-quality ‘curtain raiser’ for the opening of the Men’s and Women’s finals, and to entertain the audience between the breaks. Following the Finals, there was a live performance as the winners were announced. Helping to boost the extravaganza were 24 Aqua 580 Beam from PR Lighting.

The spectacular itself was designed by Martin Gabco, Kvant’s show designer, with lighting, laser beam and graphics all operating to time-code. While Kvant fielded 1​0 of their ClubMax 10W lasers and four Spectrum 30W lasers, some of the PR Lighting pieces were set on the balconies around the hall, some combined in a floor package behind the LED perimeter, and some were rigged above the field of play, on local overhead catenaries as the coherent beams of the lasers weaved their magic.

Kvant favour the PR Aqua 580 Beam for its supreme power and waterproof rating, and as such they stock it exclusively in their rental inventory. The fixture itself is waterproof (IP66-rated) and produces a powerful output from a Philips 25R 550W engine which is calibrated at 7800K.

Housing PR’s patent optics and a tight 2° beam angle the fixture is packed with advanced features.

Projecting over a distance of approximately 50 metres the PR Lighting pieces decorated and boosted the ambience around the hall—which was particularly effective since the lasers were not sufficient to fill the entire space alone. In fact, while the lasers were used solely for the opening multimedia shows, the automated lighting was in action permanently throughout the day, under the control of a grandMA3 (with Pangolin Beyond software running the lasers).

Commenting on the high impact of the Aqua 580 Beam, a spokesman for the organisers said: “Since these lighting fixtures have a powerful beam, it looked incredibly impressive. The atmosphere in the arena was far more dramatic whenever the lights were switched on.”