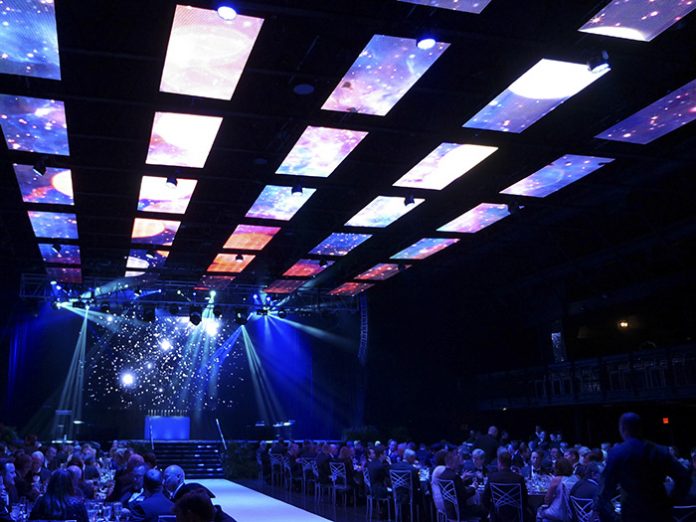 As a full-service, live event design and production provider, Goalen Group has produced projects all over the world for a broad spectrum of Fortune 500 clients. At a recent supplier awards ceremony held by one of the world’s largest aerospace manufacturers, the design firm was asked to create an exciting production design inside the newly renovated The Bomb Factory in Dallas, Texas.

Being given the opportunity to produce in a state-of-the-art music venue, Goalen Group wanted to push their design to a higher place, so they created a truly unique overhead LED video design with FLEXLite Plus 3.9mm LED video from PixelFLEX. “We specialise in the creative production of corporate events and have been a long-time supplier for this client at their annual senior leadership meetings and supplier awards ceremony,” began Matthew Goalen, Vice President and Technical Director, Goalen Group. “When we found out that the supplier awards this year would be held at The Bomb Factory, we were very excited to be headed to a fantastic music venue that would give us expanded technical and rigging abilities. With the expanded rigging capabilities, we then decided to turn the design on its head a bit and create a unique, overhead LED video experience using 3.9mm FLEXLite Plus.”

FLEXLite Plus from PixelFLEX is one of the highest resolution curveable LED displays on the market and is capable of a 15-degree curve in any direction. With its bright, dense display and high refresh rate, FLEXLite Plus photographs and videos extremely well and its tiles are calibrated directly out of the box to decrease failure, and ensure the perfect colour and brightness of any LED video design.

“In the past when designing corporate productions, projection was the way to go, but as the LED video technology has evolved in reliability, resolution and cost, it has become much more beneficial,” added Goalen. “Understanding that LED technology is only going to continue to evolve for the better, we are really starting to think outside the box to see how we can push our designs even further. Since we had the technical ability to make this design more of a rock-and-roll environment we really wanted to give the producers a truly memorable event.”

Getting started on the LED video design, the team at Goalen Group began with the content that would be used during the annual awards ceremony. With the idea of giving each award recipient their own visual theme, the in-house content development was driven by the technical layout so that all the design elements worked as one.

“A lot of what we do is also about building the video content as well to fully encompass the design we are creating,” explained Goalen. “We knew that putting the LED tiles above the house wouldn’t work unless we had the right content, and at corporate events you have to balance going too far in the production design. We decided to connect each supplier’s award to a series of high res video imagery narratives that would produce a theme specific for each supplier throughout the night, and it was amazing to see everyone connecting with the LED video in an immersive production environment.”

With the content creation now complete, it was time for the load-in at The Bomb Factory, a 50,000 sq ft venue located in the heart of the historic Deep Ellum district in Dallas, Texas. Given only a day and half to complete the load-in before rehearsals began, Goalen needed the production design to come together quickly and easily even though they were creating a completely custom LED video experience.

“Having never assembled this type of top-hang LED video design before, we really were reliant upon the crew from PixelFLEX, who were amazing,” stated Goalen. “The biggest challenge was finding a way to connect the panels to the 400ft of truss in a timely manner so that we could stay on schedule during load-in. Jon Chavez at PixelFLEX came up with a great rigging solution that allowed us to finish way ahead of schedule on the first day, which then gave us the time to complete the minor tweaks we had actually planned for the following day.”

Ready for the show to begin, Goalen and the team were eager to showcase the design to everyone in attendance. Knowing that this would be an event like none before, they were careful to unveil the power of the LED video design at precisely the right moment so that its full impact could be enjoyed throughout the night.

“We didn’t want to blow the room out with video so we broke the design up into a series of 2 panel by 2 panel rectangular modules suspended over the house where the content would flow through the space in between each module,” explained Goalen. “When guests first arrived, we had all the tiles in black and then once the ceiling started to come alive, their faces were in awe of what they were experiencing. You could tell that everyone was really engaged with the production environment which made this a very memorable celebration.” he concluded.