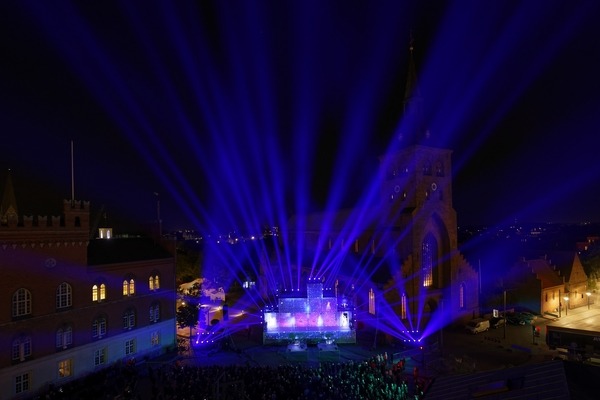 Lighting Designer Björn Hermann used 40 of Elation Professional’s PLASA 2017 Innovation Award winning Proteus Hybrid lights, which saw its European debut before the public in Odense. “Many of my events take place outdoors, under the open air. In theory, one can also use any other light open air, but then need a dome as weather protection. In Odense, however, we were not dealing with a 100-meter stage; also, the lights were not far from the action, but right in the middle. In such a setup, domes need a lot of space and quickly destroy live and camera images,” he explained.

The IP65 certified Proteus Hybrid came in handy for Hermann with lighting positions defined by the free space available in the structure of the scaffold platform. Hermann placed 3 Elation Professional Proteus Hybrid fixtures in each free space. A few other spotlights found their place on cantilever braces, with which the lighting designer optically extended the stage and set a light frame. In total, 24 of the new hybrid Proteus lights were used on the scaffold platform. In addition, 2 smaller Layher scaffolding platforms (8 by 2 meters) were placed to the right and left of the stage, each about 15 meters away, on which a further 16 Proteus Hybrids were used.

Hermann added: “The Proteus Hybrid is as good as the other hybrid lights on the market. As I was working outdoors, it was clear then that I would choose the light with the IP65 rating. What should also be remembered is that weatherproof lights are budget-saving because domes not only consume space, they must also be rented.” The designer also has nothing to complain about as far as reliability. He stated, “We set up the lighting system on Monday; rehearsals took place on Tuesday; on Wednesday we had a public rehearsal; and from Thursday to Saturday we had two shows a day. During that time we did not change out a light.”

A further supporting role on the show was played by 19 drones that not only interacted with the dancers during their impressive air ballet but also took part in choreographed fireworks at the end of the show. “We wanted to show that drones are not only a weapon for war but that you can also create something beautiful with them and arouse emotions in humans,” concluded Beyer, Artistic Director of phase7.