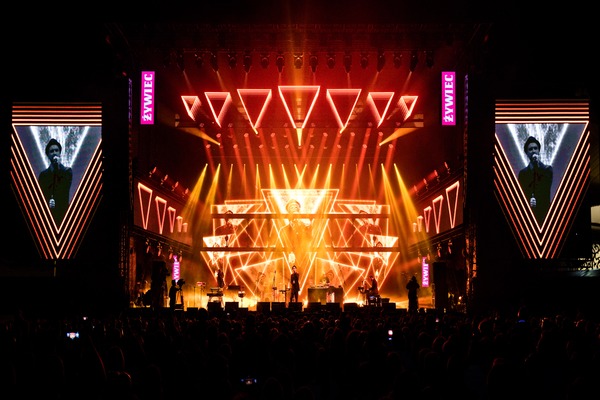 Zywiec Męskie Granie, a Polish music festival, collaborates musical experimentation and Percepto, while simultaneously using the power of Notch, to put the artists and the audience experience first.

Percepto, a Creative Production Lab, founded by Pawel “Spider” Pajak, who has been the tour’s Creative Visual Director and Producer for 5 years, knew they had to come up with something fundamentally different, technically profound and completely transparent to the audience.

Over the course of 7 weeks, the tour moved to 7 cities, with 6 or 7 acts each time. Each act includes artist collaborations. The challenges for design were huge – limited setup time in each city, door to door shows, limited rehearsal time in each city, no preexisting band content to work with, rapid load-ins and load-outs, varying music styles and aesthetics.

By using Notch, Spider realised he could finally bring one of the ideas he’s had for years to life: combine a virtually created 3D world with a physically existing one on stage and make people guess what’s real and what is not.

Notch’s real-time engine enabled him to create fully controllable and programmable in real time 3D environments, to deliver a totally different, believable, immersive experience with just the flick of a switch to change between shows.

Paweł “Spider” Pajak commented: “Notch and disguise is a real game changer for me. I’ve been using media servers and work with lighting and video for years but now everything has changed. We’ve faced and opened totally new directions of the visual creation.”

Thanks to newly developed workflow based on disguise, Notch and MA2 during the show they could control the complete 3D environment, down to individual 3D elements – surfaces, trusses, fake rgb and volumetric lighting, set pieces, virtual screens, positions and movements in x.y.z axis as well as wide range of real time generated Notch effects … whatever they wanted from the MA2 lighting desk.

The team created lots of custom made MA2 console devices, where 1 device can control even 450 individual parameters created in Notch and dedicated to certain 3d environment. “Notch became for me a very important part of the show creation workflow. This really is something I can finally call “real time modern painting” for live shows.”Paweł,” Spider concluded.