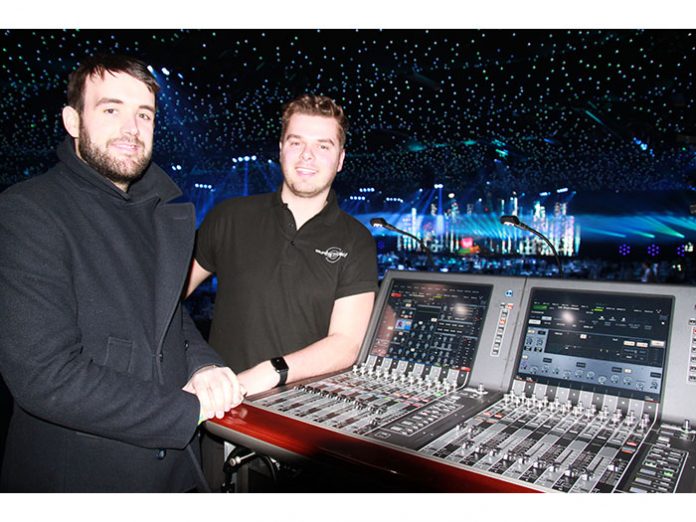 Hosted by TPi (Total Production International), the leading publication for the live production industry, the Awards evening has consistently grown in size and status; acknowledging and rewarding the achievements of the industry’s most talented, successful individuals and service companies. In 2018, more than 1,400 attended the dinner and show at the Evolution Battersea in south London.

Sound of Music, the Derby-based rental house, provided the audio production. The system was designed by MD Sash Pochibko, using the NEXO GEO M10 mid-size line array for the main PA. Virtually invisible under a venue-wide starcloth, the small-format system featured left and right arrays of just 6 cabinets of GEO M10, with a small cluster of 2 M10 modules above the centre of the wide stage. Mid-way down the venue were 2 delayed clusters of 4 M10 cabinets. Frontfill and outfill were provided by NEXO’s super-compact ID Series point-source cabinets.

Under the supervision of audio production manager Mike Burwood, the set-up used entirely digital signal path, from the Sennheiser 6000 Series radio microphones (with Ciaron McKenna in charge of RF) to the loudspeakers, all running over a Dante network.

Using a brand-new Yamaha Pro Audio RIVAGE PM10 digital desk at Front-of-House, provided for the occasion by rental company Subfrantic, the show was mixed by Chris Donovan with the assistance of Toby Chevis from Sound of Music.

Once the main Awards show was over, more than 1,000 people moved into the after show party, where a cleverly designed NEXO system delivered the DJ’s dancefloor set on a STM modular line array groundstacked system, graduating to PS Series full-range cabinets further back in the space providing lower SPLs for those who wanted to converse.

“This is quite a daunting assignment,” continued Sash Pochibko, “not because of the nature of the job but because of the identity of the audience and the stature of the event. Getting it right is more critical here than on any other show, because we have to impress our peers – all ears are on us! The Evolution is one of the best-sounding tented venues in the country, and thanks to great planning and management from the TPi team and production manager Ryan Esson, the programme ran flawlessly. There was great level in the room, and the event was completed without causing any environmental problems for this densely-populated London neighbourhood.”

Appropriately, Yamaha and NEXO jointly sponsored the Award for the Front of House Engineer of the Year. Simon Thomas won the popular vote, thanks to his work on Ariana Grande’s One Love Manchester benefit concert.

“We are excited to partner NEXO in support of the 2018 TPi Awards, including the FOH Engineer Of The Year award,” said Alex Warren, UK & Republic of Ireland Sales Manager at Yamaha Commercial Audio. “It was entirely fitting that an event celebrating the very best of the live production industry was heard through a Yamaha and NEXO system.”