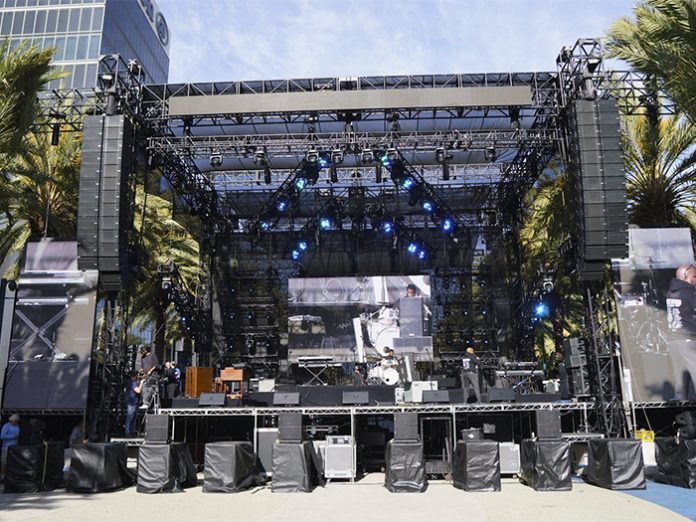 The NAMM Show finally made its much-anticipated return to Southern California last week with international delegates from the music production and pro sound industries coming together at the Anaheim Convention Center to check out the latest products and technologies.

Alongside all the booths and exhibits, visitors enjoyed a series of outdoor shows from a variety of bands and musicians on the Grand Plaza Stage, located directly outside the main convention center entrance, with sound provided by a NEXO STM modular line array system supplied and deployed by Minnesota-based events services company Reach Communications.

Side by side hangs of 12 each STM M46 main and B112 bass extension modules with 2 x M28 down fills were used on either side of the stage, while 6 pairs of NEXO GEO M10 cabinets were used as front fills. With other buildings in close proximity, a controlled low frequency dispersion was a particular requirement of the event. Matt Dellwo, Event Project Lead at Reach Communications, takes up the story.

“The Hilton and Marriott hotels are on either side of the Plaza, and the Hilton has a long concrete overhang leading up to the entrance, creating a highly reverberant space in a high traffic area. So, we used a total of 20 NEXO RS18 subs in cardioid pairs in front of the stage which was very effective in tightening the LF coverage.”

The main system was also required to cover a raised VIP podium located more than 200 feet from the stage. “The STM M46 is capable of an incredibly long throw, with the HF going just where it’s required” explained Dellwo. “So, we were able to achieve the coverage we needed without using delays.”

A second VIP area located on a third-floor balcony at the front of the convention center was covered by 2 connected pairs of NEXO ID84 column speakers, fed wirelessly with a time aligned stereo mix. On stage, stacks of STM S118 sub, B112 and 2 x M28s were used as side fills, with 12 x NEXO PS15R2s serving as wedge monitors and 6 x NEXO MSUB18s used for drum fills and side fills.

“We typically had four or five bands on during the day, then three ‘headliner’ bands in the evening” says Chad. “The NEXO system has masses of headroom and sounded great on the wide range of music being showcased, from choirs through brass ensembles to rock bands, with very smooth and even coverage from front to back.”

Also on hand was Bertrand Billon from NEXO’s Engineering Support team based at the company campus in France although, as it turned out, very little technical support was required.

“Matt and the team at Reach Communications are clearly highly experienced in designing and deploying STM systems so I was able to sit back and enjoy the show!”

“STM really is the perfect system for so many types of events” commented Dellwo in conclusion. “From a single inventory of just four different modules, we can design and configure an optimal system of any scale.”