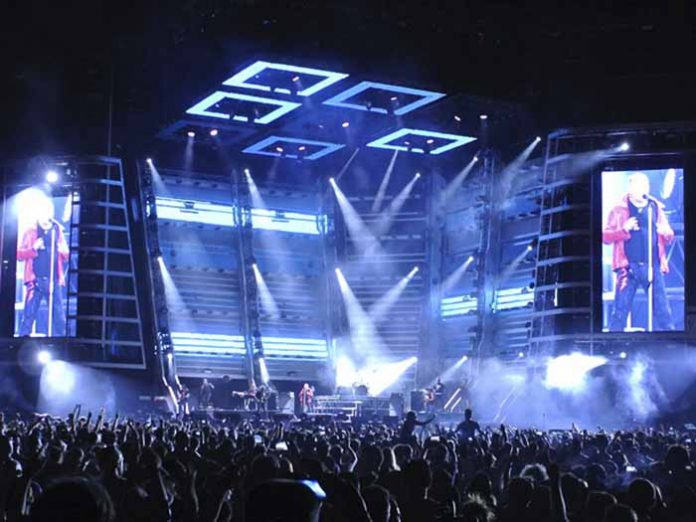 Italian pop rock superstar Vasco Rossi kicked off his new summer tour with a surprise date at the Lignano Sabbiadoro stadium on 18 June. The latest tour, Live Kom 2016, carried on to Rome with a new show and new fixtures on the stage in the form of Clay Paky Spheriscans.

The tour was lit by Lighting Designer Giovanni Pinna, who said: “The stage and most of the set-up are the same as those used for the 2015 tour. Totally unconventional scenic solutions with elegant, simple, clean lines and materials. They were designed and developed by Giò Forma, and drew inspiration from the shape of the keel of a ship.”

Among the lights that make up the lighting design, there are many Clay Paky moving heads including 54 Sharpys, 50 Sharpy Wash 330’s and 24 Alpha Beam 1500’s. They are arranged along the whole 74 metre front of the stage roofing to form a frame.

As for Clay Paky’s latest innovations, Giovanni Pinna asked for 16 Spheriscans. These are scanners with a mirror that rotates at dizzying speeds without stopping. The mirror speed, which may be adjusted as desired, reaches a maximum of 250rpm, more than four revolutions per second.

“We had little time to integrate the newcomers into the show due to bad weather. We were literally pounded with rain,” said Pinna. “I tried to make the most of the Spheriscans during the most poignant moments of the show.”

Pomezia-based BOTW, which has been following Vasco now for 17 years, was the tour service company.