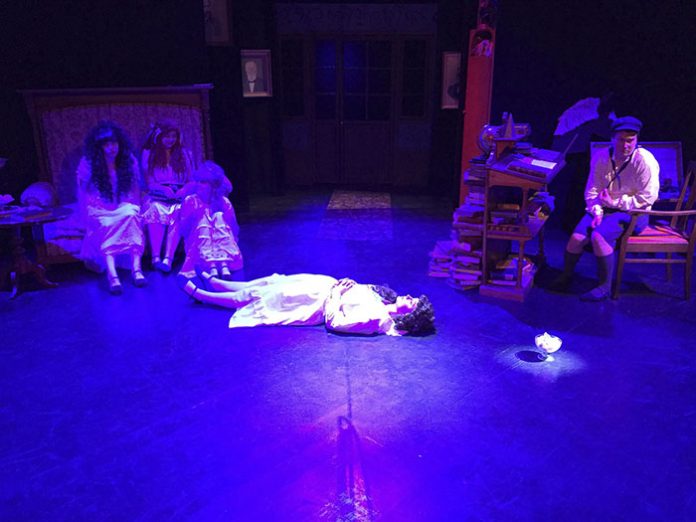 Molkom is a small, picturesque town near to Karlstad in Värmland beside the Folkhogskola (Folk High School) there offers courses in acting, film, journalism and health. In 2012 a new 140 capacity multipurpose venue was built specifically for the use of the acting and film courses, which also include modules related to the technology involved in the industries.

When Stage Manager Rune Sorgard arrived in 2015 he identified the need for some moving lights in the theatre and in early 2016 a package of Robes arrived in the form of 10 LEDWash 300’s, six DL4S and four PARfect 100’s.

He’d used Robe lights frequently before coming to Molkom College and already knew that Robe was great for stage and concert applications, however only when he started work at the College did he start looking at the brand in a proper theatrical context.

The DL4S he liked immediately for its output, the colour correction filters and the shutters – “It’s a fantastic light and all the features you need for detailed and intricate theatre lighting are there.” He also appreciates the simplicity of the design. He’s a multi technician – not just confined to lighting – so he will always look out for equipment that is well constructed and likely to be robust and stable.

LED fixtures were also important for the College – low maintenance and running costs with no consumables like bulbs or gel needed. He comments that Robe’s LED colour mixing systems have always been among the best, and the light weight of the fixtures is another huge plus as is functionality like the DL series being flicker free for TV and film work which is relevant to them too as film students are taught all aspects of how cameras react to light.

HIs experience with Robe’s Swedish distributor Bellalite throughout the project was excellent: “It’s all down to relationships really – I am super happy with everything!”

Having the new rig has made an enormous difference to how shows can be lit. They replace a lot of conventionals, and the students are all loving the new lights. In fact, having them there has energised a big interest in lighting generally as a technical art. The venue hosts mainly theatre productions but because it’s a school, it’s also used extensively for rehearsals, and students also learn the aspects of lighting, visual and sound involved in stage performance and film making – and how it relates to the acting.

Tied into the funding is a pledge to embrace the latest technologies – so when Rune initially suggested they needed moving lights, he was able to go ahead and start the ball rolling with the purchasing process. He thinks the ideas and products coming out of Robe at the moment are very exciting and loves the way the manufacturer is focusing on ranges like the DL specifically for the worlds of theatre, television and film lighting.