Magdolna ‘Magdi’ Rúzsa herself won the title of Megasztár (Megastar), Hungary’s nationwide talent search, back in 2006, and now she was filling the 12,500-capacity venue for two consecutive nights, supported by a classic five-piece rock band line-up. To ensure sound was broadcast evenly to all corners of the venue BG Event used a total of 46 MLA cabinets, and four MLD Downfill enclosures as main PA and side hangs. They also provided monitors.

But this doesn’t tell the full story. In achieving this exceptional coverage BG Event’s Balázs Szentiványi notes the inherent challenges faced. “This is a difficult venue compared to an average arena in Europe due to its larger size,” he explained. “It measures 120m across by just around 80 meters deep. Moreover, it ends in smooth flat vertical concrete surface and a huge glass sided room for the follow spots. There is a significant slap back with delay coming from there—and there is also a VIP section et the end of the venue high up above last seats.”

He said many production companies had come to grief at this venue over the years. “However, we have had several occasions in recent years when we have been able to demonstrate just what MLA is capable of including Sir Tom Jones, Sting and Slayer, to name a few. In fact our technical team is excited every time we go into the Papp László Budapest Sportarena.”

For this, he credits the company’s experienced sound team — along with the award-winning attributes of Martin Audio’s advances control technology — for its ability to tame the venue. BG Event’s FOH Engineer, Gabor Bacskay-Mazsi and System Engineer, Marci Mezei are both hugely experienced with MLA, having worked frequently at the massive Sziget Festival as well as many other domestic tours.

The two men jointly evolved the ideal set-up for this particular arena show. Behind the main left PA there was an MLX sub array rigged as well. Contrary to the electronically delayed sub layouts it was in phase in the full venue and also delivered sufficient volume—even in the upper and rear sections of the room. 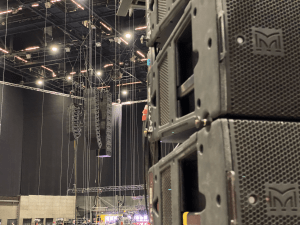 In addition to the MLA consignment, the 22 MLX subwoofers, were designed to provide a mighty LF presence, with 10 boxes rigged on the left flank, and the remainder on the ground in two by three end-fire setup. A further 36 MLA Compact cabinets were deployed as two delay lines, and near fills. Balazs explained: “We had to be careful with the unwanted reflections — particularly as the farthest and highest location seating in the audience sector was added at the last minute, since the concert was sold out on both days.”

For control they used Martin Audio’s proprietary Merlin processors and new DX4.0, as well as a Lake LM44 to optimise the system. Having worked with Magdi, the band and the technical team for six years BG Event had been confident of being able to produce this superior result—particularly as the FOH engineer has ten years of experience with MLA. “Yet despite this familiarity, with both the PA and the mixing consoles, it was still surprising that we could achieve 96 dB(A) level—and that in the back-most rows the sound was dynamic yet loads of headroom,” said Balázs Szentiványiin conclusion. “Coverage was excellent in all sectors in the arena, which was an important factor as the audience age ranged between six to 70 years old.”