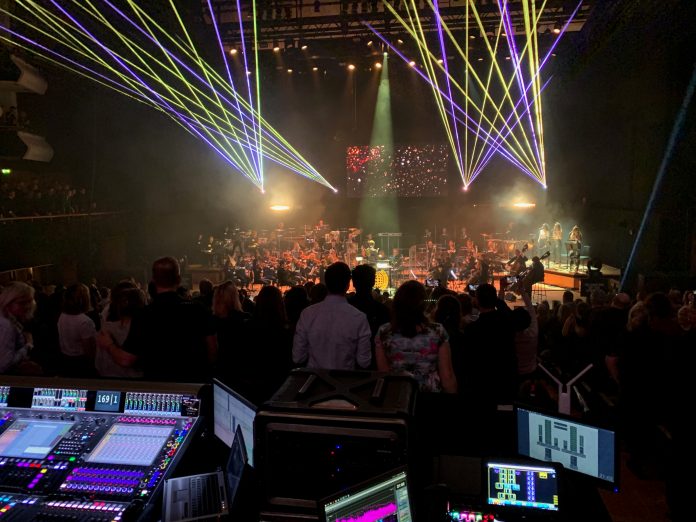 Ministry of Sound The Annual Classical is a newly-created orchestral tour that received its world premiere at London’s Royal Festival Hall recently.

The event sets out to celebrate the famous club’s legendary dance music compilation The Annual — the best-selling dance compilation of all time. Martin Audio has itself enjoyed a decade-long relationship with the south London club and tasked with faithfully reproducing the newly imagined sound on the road was RG Jones Sound Engineering and their trusty Martin Audio MLA Compact PA.

Although the concept was new, reproducing major classical music events for promoters like Raymond Gubbay is familiar territory for RG Jones Sound Engineering, who has been specialising in this genre for many years.

The system designer for the RFH show was another MLA stalwart, highly experienced system tech Mark Edwards, while the production itself was a joint project between Coalition Agency (MoS Tours and Events producer), and Raymond Gubbay Ltd, Europe’s largest classical music promoter.

The show on London’s South Bank was a sell-out, and for FOH engineer Phil Wright this meant mixing a 50-piece orchestra, along with drums, electric bass, electric guitar, three synths, three backing vocals and the DJ, through 12 MLA Compact elements per side (as main PA) and eight MLA Mini per side as side fills for the boxes. In addition six Martin Audio MLA Mini were used as lip-fills, and six MLX subwoofers were arranged in two blocks of three, in cardioid formation.

This provided even distribution and identical audio to each of the 2,500 or so seats in the house while delivering a superior experience for the musicians onstage.

“The key thing for this event was to keep sound levels to a minimum on stage,” reported Wright. “To this end, we employed 17 Allen & Heath ME-1 personal mixers for the key players and the conductor, and an additional 18 Martin Audio DD6’s for compact low level distributed monitoring.” Using a DPA solution, he also had to mic much tighter than for a conventional classical show because of the need to reach 100-105dB(A) at the FOH position.

The challenge of keeping the stage quiet and clean while delivering festival levels at FOH meant the choice of the MLA family had been axiomatic. “It is the only system I would consider for this kind of event,” the sound engineer exclaimed. “The Hard Avoid feature on stage and the incredible cardioid subs meant that we could really meet audience expectations while maintaining reasonable levels on stage.

“In addition to the extremely accurately defined coverage, the system needed to be very flat and linear, so that I achieved maximum gain before feedback and transparency since the show is much more dynamic than a purely electronic event because you’re dealing with real instruments on stage.”

The show required a click track which he played in from his dual-redundant ShowCueSystem rig; this provided Click & Bar numbers on video to the stage and also SMPTE to lighting for sync purposes.

In summary, Phil Wright credits RG Jones’ skilled stage crew for the delivery of an excellent show, at the same time reporting that MLA Compact had performed flawlessly.

“An additional bonus was that production manager, Bluey Design’s Mark Hardwidge, was extremely happy because the compact, lightweight nature of MLA Compact and MLA Mini meant that we could use the in-house PA bars rather than rig motors, which would have added time and cost to the production.”