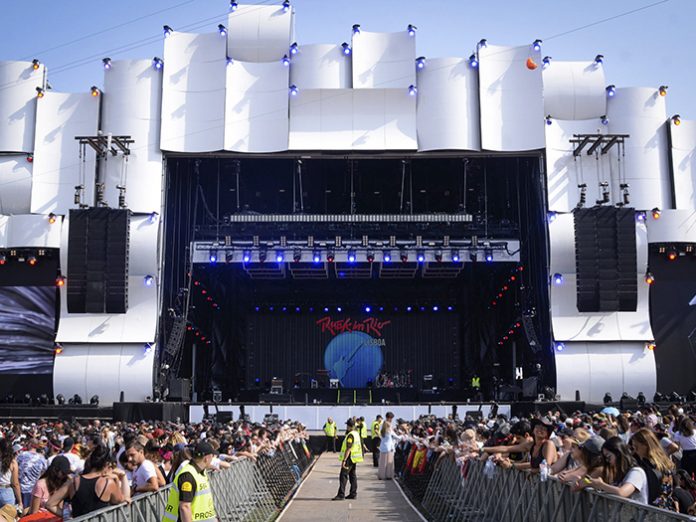 Having established itself as the first choice on main stages at Rock In Rio — in both Brazil and Lisbon — Martin Audio MLA stretched the envelope further at 2018’s event in the Portuguese capital with the addition of MLA to the second delay line.

“This helped to push our coverage out further with greater clarity and impact,” stated Peter Racy, Chief Engineer at the sound production company, Gabisom.

It has been a fruitful journey for the award-winning system which began in 2015 when Martin Audio MLA was first trialed on the second stage at Rock in Rio USA, in Las Vegas, and later in Rio that same year. Due to its success, MLA was then deployed for the first time on the World Stage at Rock in Rio Lisbon 2016, and has subsequently held this position for the following 2 editions: the 2017 event in Rio leading into Lisbon again in 2018.

Racy has been there every step of the way, and once again faced up to the challenges head-on. “The main concern was to obtain even coverage over the entire audience area,” he stated.

The audience area is a natural park approximately 300m deep by 200m wide, with asymmetrical relief and a large VIP area at the very back. Racy continued: “Clear and powerful sound is essential there since that is where all the bosses hang out.”

The PA system followed the template of 2017. “We again set-up the side-by-side rig which has been the trademark of Rock in Rio,” he said. “This year we not only made MLA available for the second delay line but the ground-stacked subs were set up as end-fired arrays.

“These two design changes proved a massive improvement to the overall outcome of the far-field,” Racy continued. “The main system was set to throw 180m at the point where it blended with the second delay line (the first delay line being used merely to support this ambitious throw distance in the case of wind).”

The second delay line needed to cover the remaining 80m of the audience, as well as serving the VIP terrace beyond and 5m above the grass. “This was quite a tall order for four towers with six MLA on each, though it did perform exceptionally well. The main PA’s end-fired ground subs made their presence felt at the back and were assisted by a few more MLX at the base of the second delay towers.”