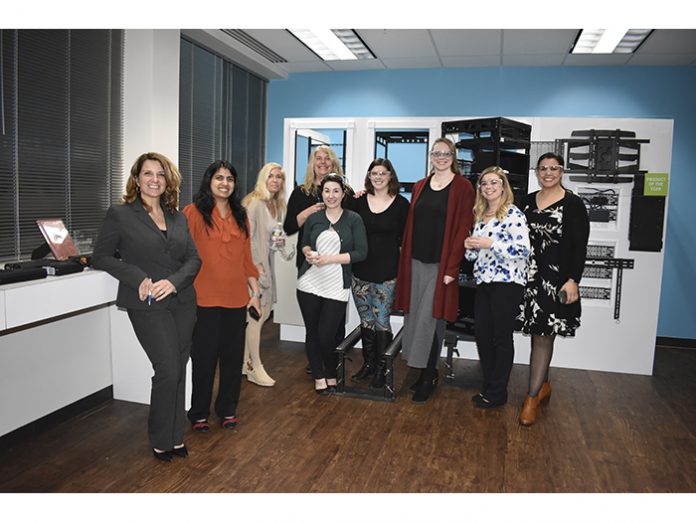 Middle Atlantic Products has announced that the northeastern chapter of AVIXA (Audiovisual and Integrated Experience Association) Women’s Council was held at the company’s headquarters in Fairfield, New Jersey on 3 April 2018

Co-located with Legrand’s elle@LegrandNA local chapter, the event brought together the leaders from elle@LegrandNA and more than 40 other women in the industry to tour Middle Atlantic’s facility and learn how the company is advancing Legrand’s sustainability strategy. The event turnout was the largest ever for a regional AVIXA Women’s Council meeting.

“Along with AVIXA, we recognise how incredibly valuable diversity is for leadership, spurring innovation and recruitment,” said Cheryl Smith, VP of talent management, Legrand.

“Hosting this event with AVIXA gave us a welcomed opportunity to broaden the outreach of our Legrand Elle program and spread the message about what we’re doing to bring women engineers, including those early in their career, into our organization and into the AV technology industry at large. Talented employees have a lot of choices these days, especially if they’re mobile. Legrand’s Elle organization provides many initiatives and programs that help nurture and advance women’s leadership skills.”

The event opened with a welcome from Mike Baker, president of Middle Atlantic, followed by tours of the Middle Atlantic facility. During the tour, attendees learned about Middle Atlantic’s industry-leading commitment to sustainability.

The tour provided in-depth insight into how sustainability has been one of the driving influences of their customer service excellence. Finally, Aly Courain, Middle Atlantic’s sales and marketing program planner, presented information on how elle@LegrandNA is furthering the mission of AVIXA’s Women’s Group through a global and local program and events to provide peer support and drive conversation around personal and professional pursuits. Also during the event, AVNation interviewed Baker, Courain, and Smith for a live podcast episode about the importance of diversity in the AV industry.

elle@Legrand is designed to support and nurture the development of women within the organization with local chapters. Led by six regional leaders, the cornerstone to the local program is focused around Lean In Circles, a concept founded by Sheryl Sandberg, COO of Facebook and author of the book Lean In: Women, Work, and the Will to Lead.

Using Sandberg’s approach, Circles are made up of small groups of women within each company location who meet monthly to network, openly communicate about issues they’re facing, and learn more about each other as well as about other company departments, roles, and processes. In addition to Circles, quarterly in-person gatherings offer cross-circle networking, collaboration, content from guest speakers, and panel discussions.

Middle Atlantic Products has been part of Legrand since its acquisition in 2011.