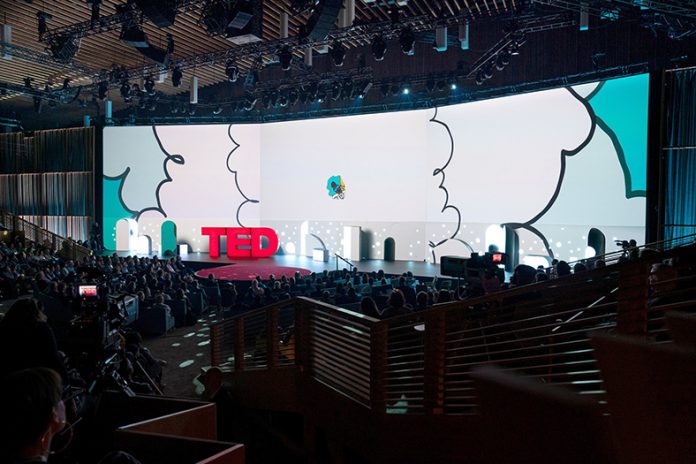 Meyer Sound has announced a multi-year partnership agreement to supply audio reinforcement systems for the annual TED Conference, the flagship event for the iconic, multi-faceted global community dedicated to spreading new insights and ideas for the benefit of humanity. Inaugurated at TED2019, held recently at Canada’s Vancouver Convention Centre, the collaboration between Meyer Sound and TED is the result of what both enterprises regard as a common culture of excellence.

“One thing that I noticed when I first reached out to Meyer Sound was that we share the same values,” says Director of Production and Video Operations for TED, Mina Sabet.

Maintaining consistent audio quality for both simulcasting/recording and a live audience involves a number of challenges. Working within those constraints in the custom-built, 1200-seat wrap-around theatre inside the convention centre is TED Audio Lead Michael Noonan.

“The last thing I want to do is call the front-of-house mixer and say, ‘You’re in my way, turn it down,” said Noonan, who directs operations from the broadcast audio booth. “So we have to find ways to deliver a compelling audio experience to the live audience, to make it as rich and transparent as possible for them, yet still make it seem like there was no PA in the room for the broadcast sound. And that’s critical for the speakers, because so much of their personality, so much impact of what they are saying is wrapped up in the tonality and dynamics of their voice.”

According to Sabet, the new collaboration has reaped immediate benefits in that respect. “If you’re not feeling the audio in your bones when sitting in the TED Theater, then you’re not really getting the full experience,” she asserts. “That was my goal this year, and Meyer Sound helped us achieve it. They redesigned our theatre audio system in a way that makes you feel the sound is blanketing you throughout the talks or performances.”

The most notable simulcast location was an innovative, completely immersive experience dubbed TED Under the Stars. With lighting, set pieces and projections set up to emulate an outdoor campsite, space also featured an immersive sound system with 16 UP-4slim loudspeakers each pole-mounted on an MM-10ACX subwoofer. The complementary sound design was accomplished via a D-Mitri digital audio platform with 24 channels of Wild Tracks playback.

The smaller Community Theatre, also inside the Convention Centre, was supplied with a Meyer Sound system based around M’elodie line array loudspeakers with 700-HP subwoofers and UPJunior delay loudspeakers.