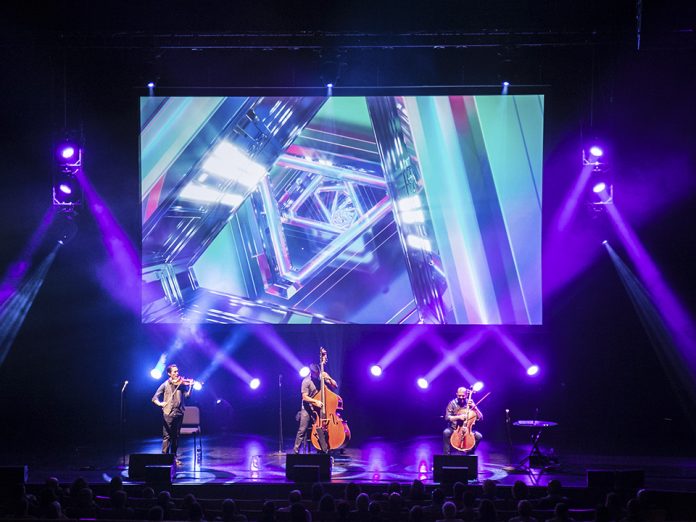 Erik Parker has supported a variety of different bands from multiple genres with engaging lightshows. However, even he has to acknowledge that nothing in his portfolio was quite like his project for lighting Simply Three. “This was a new type of music for me,” said Parker of Chris Lisle Lighting Design. “It’s a three-piece string band that rocks to covers such as Take Me to Church by Hozier, Photograph by Ed Sheeran and Counting Stars by OneRepublic, as well as many classics from Puccini to Gershwin. Lighting them was challenging, but a lot of fun.”

Parker met this challenge in stunning fashion at the internationally acclaimed group’s recent homecoming concert at the Mesa Arts Centre outside Phoenix with help from Chauvet Professional Maverick and Rogue fixtures, supplied by Creative BackStage. He positioned eight Maverick MK2 Spots and 12 Rogue R2 Washes on various truss structures and the stage deck, using them for top, back and side lighting, as well as silhouette and eye candy looks. The fixtures were connected via 5pin DMX through the in-house CAT5 lines.

Like Simply Three, which has attracted a large following by bending genres in surprising ways (its novel cover of Avicii’s Wake Me Up got over 12 million YouTube views when it was released), Parker was able to pull together a wide variety of different lighting elements into a cohesive and original design. “I wanted this show to look as big as possible with a fairly small amount of gear,” he explained. “We had a large project screen in the middle of the stage — and video content is a huge part of the live show. My focus was to enhance the energy of that video content with lighting, while also creating powerful effects on stage. These fixtures helped me accomplish that very well.”

To highlight the members of Simply Three, Parker flew one of his Maverick MK2 Spots on the second electric over the group and arranged the other units behind them. “I used these spots for a lot of texture on the guys,” he said. “The Mavericks helped me do cool back/top lighting from where we flew them. Also, I really enjoyed the Mavericks’ optics. They punched through the stage washes, and the gobos added some great break-up patterns to the stage. I was really impressed with these lights.”

Parker used the Rogue R2 Washes in his rig to weave the lighting design and the centre stage video unit closer together. “I placed a couple of Rogues on either side of the video for side light, which worked to fill the empty space,” he said. “I also had some on a custom upstage pipe structure that was built in the shape of a W. Then there were the Rogues on the floor, which were key to adding pop to the show with a lot of eye candy.”

The rapid-fire string music of Simply Three can conjure up a torrent of emotional forces. Parker relied on the fast pan and tilt movement of his fixtures, rapidly changing aerial washes and crisp gobos from his Maverick units to keep up with the intense rush of feelings conveyed by this remarkable trio.

“It was a great experience for me,” said Parker. “The guys in the band were super nice, and John Garberson and James Simpson of Creative BackStage were wonderful to work with. This was a project that all of us enjoyed.”