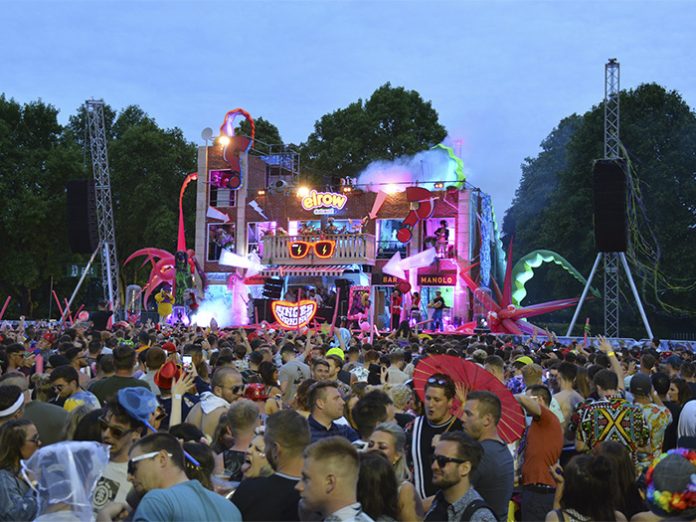 Immersive Spanish party brand, Elrow, has made its Welsh debut with the spectacular Singer Morning dance event in Cardiff – in the grounds of Glamorgan Cricket Club’s Sophia Gardens. The picturesque gardens played host to a capacity 6500 dance fans on the Sunday afternoon. Reinforcing the sound for headliners Eats Everything and Patrick Topping on May Bank Holiday Sunday was James Jewry from Cheshire-based Soundteks, who brought in Manchester based VME with their award-winning Martin Audio MLA and MLA Compact loudspeaker arrays.

Jewry designed and specified the MLA system on behalf of the dance giant Elrow, purely based on the city centre location of the site. Nine elements of MLA (and an MLD Downfill) were flown on either side of the stage, while 16 MLX subwoofers were set across the front in a broadside cardioid array, 11 front facing and five rear. Six MLA Compact were used as front fills to complete the system.

As for the subwoofer design, Mark Cleator, VME’s head of sound, reveals: “James designed the sub configuration taking inspiration from the Main Stage MLX setup at Glastonbury, and followed that example. It worked extremely well and the promoters were over the moon.” Cleator himself system engineered MLA while Jewry mixed at FOH. “In many ways it was a dream job,” declared Cleator. “No rigging issues and although we had strict offsite limitations of 65dB(A) we were able to run at 94dB(A) within the main area during the headline set by attenuating any problematic off site frequencies. We utilised the ‘hard avoid’ behind the arrays in the Martin Audio software to bring the focus forward and bamboozled people at how quiet it was behind the stage.” Martin Audio’s smaller MLA Compact also made an appearance in the DJ booth, where three MLA Compact and a pair of DSX subs were stationed.

James Jewry utilised a Midas Pro 1 for mixing duties. “With the right sounding desk in front, the MLA comes to life. Its resolution and control are phenomenal. It always amazes me what I can get out of it before we hit off site issues. It’s vital that I can give everyone across the site the same experience, on these events atmosphere is everything. The MLA does that and more each time I use it — and it just gets better.”

And so the Elrow Town daytime party concept, already used for major shows in Valencia and Poble Espanyol in Barcelona, can now add Wales to its portfolio.