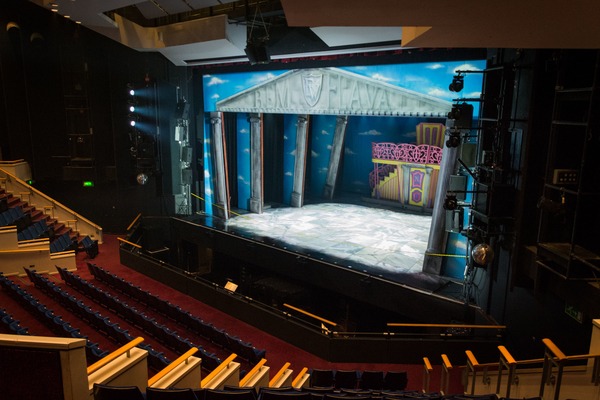 dBS Solutions specified a Martin Audio XD15/WS218X while on tour with Broadway and West End’s Legally Blonde The Musical.

The Martin Audio models were scouted by Legally Blonde The Musical, for which dBS Solutions has deployed the larger Martin Audio XD15, for its high specification unit with 15 inch LF drive unit and 1.4 inch neodymium HF compression driver.

The smash hit Broadway and West End musical, based on the major box office movie, has been produced by musical theatre and pantomime specialists, UK Productions. They contacted dBS Solutions based on the audio company’s past success with their flagship Christmas pantomime in Sunderland.

Sound Designer Chris Bogg commented: “The show’s American girl-heavy production numbers have a tendency to sound ‘squeaky’ to me so the main aim was to make the sound less shrill and much warmer. We have achieved exactly what we set out to, and produced a great sound for the show.”

The cast uses 28 radio microphones, with 7 musicians in the orchestra pit on personal monitors,with tracks and sound FX from 30 channels of Qlab. A total of 8 mounted XD15’s are situated in 4 pairs on the vertical truss, focused into the different balcony tiers, each with independent control. “With the XD’s we have multiple options thanks to the rotatable horn; in traditional format it is 80° wide but with the horn rotated the width of dispersion is 130° using two boxes and if we want something in between we can format the horizontal coverage for 100°.

“But in the upper tiers, the 15 inch drivers in the XD15 will go sufficiently low that we find we don’t need further dedicated subs. They will handle all the frequencies we need and consequently this has massive time implications when setting up, allowing us to concentrate on the rest of the system,” explained Bogg.

Associate Sound Designer, Matt Chisholm, Production Engineer Richard Pomeroy, and the show’s team of Kieron McGuire and Luke Capay assisted Bogg with production during the tour. The dBS Solutions MD concluded: “We have been getting great results from the Martin Audio system. It’s sounding exactly as it should and everyone is delighted with it.”