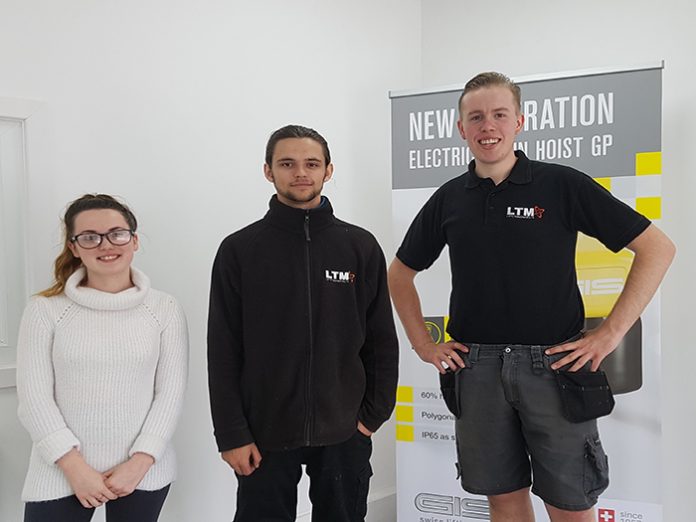 Lift Turn Move based in Wirral, has shown a commitment to training the future generation and can confirm that two of their apprentices Charmaine and Josh have now joined LTM as full-time staff members.

Charmaine Pude came to LTM in 2016 to gain office experience and work towards her NVQ Level 3 in Business Administration. She has recently passed her NVQ and subsequently been given a full-time job at LTM as a Sales and Purchasing Assistant. Office Manager Jenny Steenson stated: “Char is an irreplaceable member of the team, quiet, helpful, thorough and she gets stuck into any task given to her.”

Joshua Field-Baines approached LTM in 2015 wanting to work in Engineering. He has since completed his apprenticeship and is working towards his Advanced apprenticeship qualification in BTEC HNC in Engineering which includes an NVQ Level 4 and he is also doing his LEEA foundation training. LTM’s Managing Director John Jones states ”From the day he started he has absolutely immersed himself in his role, he is hard working, keen to learn and a credit to himself! We are very lucky to have gained two valuable team members at LTM.”

John Jones stated: “We know how important it is to give the younger generation a chance, the lifting industry suffers from an ageing workforce, something has to be done about this – “As a responsible employer we feel it is important not just to recruit talent, but to nurture it”.

With this in mind, we have taken on a new apprentice Jonathan Street”. He has joined LTM on an engineering apprenticeship in Electrical and Mechanical Maintenance which involves one day of tuition at a local college to learn essential theory and 4 days a week working in the hoist assembly area to develop his practical skills. He will spend time in the warehouse receiving product training, dispatching goods and working with the other engineers.

Skills shortages and recruiting difficulties are considered to be some of the biggest threats facing businesses today, and The Young Apprenticeship Scheme addresses these issues directly, commenting on it, John Jones remarked: “It’s becoming increasingly difficult to recruit skilled lifting equipment engineers, so we feel that the best way forward for us is to bring new apprentices through the business.”

As well as addressing a skills shortage, the National Apprentice Scheme states that “Apprentices tend to be eager, motivated, flexible and loyal to the company that invested in them.” These statements come as no surprise to LTM, 2 of their original apprentices are still at the company, and both have subsequently moved into supervisory positions and been asked to travel abroad to use their skills.

LTM is committed recruiting at least one apprentice per year over a 5 year period from 2015 to 2020. As a responsible employer, we feel it is important not just to recruit talent, but to nurture it. “Ultimately it’s all about the people, if we get people in with the right attitude like the guys we’ve had through on this scheme, then we’re all set. You can teach the right skills, but you can’t teach the right attitude.”