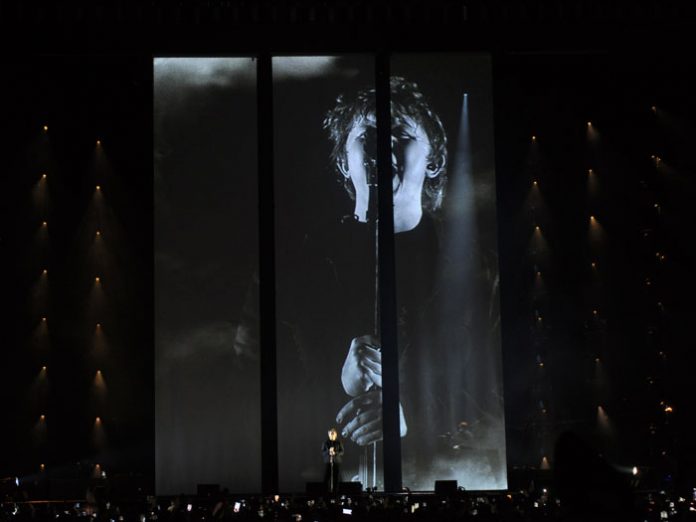 With songs of such acclaimed sensitivity and depth and a unique voice with which to impart them, Lewis Capaldi has now turned his attention to context. His first arena tour in the UK saw design partnership Cassius, Chris ‘Squib’ Swain and Dan Hill, respond with comparable sensitivity, taking a stark minimalist stage set and enfolding it in textural layers of video with a mix of roller-drop projection and hi-def LED.

“It’s a fascinating landscape,” said tour video director Mark Davies, “Squib and Dan determined to place the focus squarely on Lewis with a strong imperative on his art and artistry. For me, that has meant seeking a far more nuanced and thoughtful perspective for the live camera work that forms such a strong part of the narrative.”

The LED screens, camera package and six 30K Panasonic laser projectors are supplied by Video Design; so too the Disguise gx 2c servers for some stunning content from North House.

“Tom Bairstow and the team at North House have taken what is a technically ambitious show and found ways to weave their content with the camera images,” explained Davies. “The back wall of the stage is entirely covered by 5mm LED, the Cassius stage design includes five roller-screens in a line across the front of the stage with two further roll-drops each side forming a chevron tapering toward the upstage centre. These are the destinations for the projectors. The roller drops are frequently set at different heights, often presenting as squares rather than rectangles and not infrequently descend in front of the musicians – they are translucent.”

“Although I have six cameras, four with operators, using two CamBall 3 robo-cams on stage was problematic. Shooting between and under the roller drops demanded constant repositioning. Fortunately, Alex Leinster at Video Design has been developing a remotely operated camera tower which I’d been able to beta-test on Pete Tong’s Ibiza Classics before Christmas. Smooth and easy to operate, the raising and lowering of the tower simply becomes an added axis of control for the CamBall 3’s MFC. The extra dimension they gifted me was so good that I instantly decided to spec’ them for Lewis.”

“Tom and North House, with input from Squib and Dan and indeed Lewis, who has a strong vision of how his performance should be portrayed, have produced some beautiful pre-filmed clips that need to be carefully blended into the live footage. The stylistic imprint of the whole presentation depends on such subtle interplays and easy to use well-designed tools such as the Video Design camera towers make that an entirely practical option for touring. I love them.”

The tour has already passed through Europe in February to much acclaim and, following Capaldi’s signature performance at The Brits undertakes a cruise though the arena circuit of the UK throughout March, before moving to North America April/May, returning for the early festival season June and July.