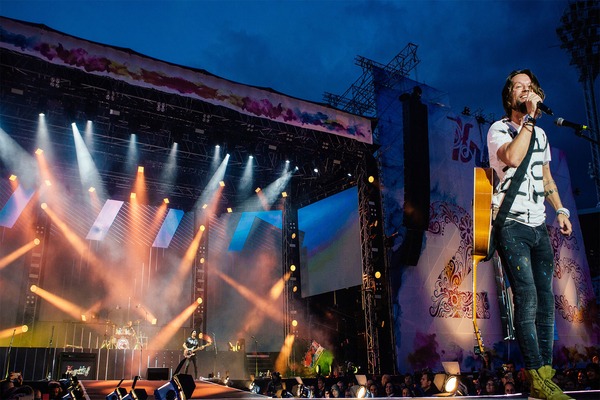 Kryštof celebrated their 25-year anniversary in style with a sold out arena tour and a 2-night concert at the Stadion Evžena Rošického in Prague, supported by Robe fixtures.

Full production, which included around 100 Robe moving lights, for the tour and the stadium shows was supplied by ZL Production who have a long association with Kryštof. The band’s Lighting Designer Jiří Rouček is also a long serving crew member, and since 2010, has also been working as head of lighting for ZL Production based in Plzen and Prague.

Twelve of the 18 Robe BMFL Spots were positioned upstage on over-stage trusses with another 6 on the floor behind the band, while the BMFL Blades and ColorWash 700E ATs rigged on the front truss. Additional Robe ColorWash 700s provided the basic stage washes.

The Robe Spiiders and Pointes were positioned on 6 vertical towers each side of the 5 onstage sections of LED screen, providing all the main effects looks in a variety of colours, shapes and effects that really energised the performance space.

The Robe Spiiders were run in Mode 4 for full pixel mapping potential which created another complete layer of looks. Rouček utilised several pre-prepared maps to assist the process and the final compositions, and he made the most of the flower effect which was much appreciated.

“Spiiders are very easy to use just as a basic wash, however the 4 – 50 zoom greatly enhances their versatility and really adds so much value. It is one of the best performing spot moving lights available today. The output of the 1700W lamp is fantastic for large events like this. All the BMFL features are fast and allow a lot of creativity through different combinations of colour, gobo, iris and other FX. It is an amazing fixture!” he exclaimed.

ZL Productions’ Owner and Founder Jan Lippert added: “When we took on delivery of the full technical production of these shows we knew it was an ambitious project, and our goal was to deliver a truly world class show for the band and their many fans, something they would remember for a long time!”

The company currently house nearly 100 Robe fixtures in rental inventory. The company’s first Robe purchase was 8 LEDWash 600s back in 2010. “Going the Robe way was our best choice!” Lippert concluded.