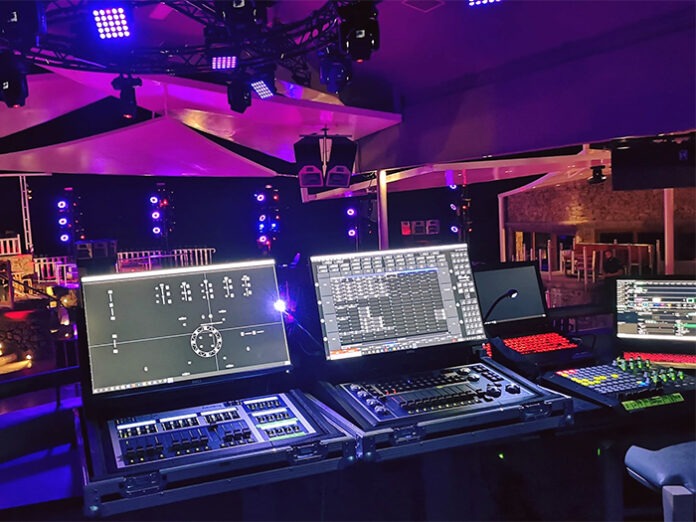 DJs who perform at Cavo Paradiso in Mykonos, Greece don’t typically require a backdrop, not with the starry sky and wide expanse of sea behind them. They do, however, need a dynamic light show to reflect their personality and music, which is precisely what Kiriakos Dimitriadis provided for German DJ Boris Brejcha on 15 August 15, during an appearance at the reopened club following the lockdown.

Due to the COVID-19 pandemic, the club had to follow strict social distancing protocols. Temperatures were taken before anyone could enter, the number of visitors was drastically limited, and patrons could not mingle between tables, at the DJ booth, or on the outdoor dance floor.

Without the crowds, and with no one dancing, the vibe at this normally jubilant club could have seemed flat. Dimitriadis did his part to prevent this from happening. With human movement absent from the dance floor, he made sure to provide a “dance of light” with his full-throttle four-universe, 75-fixture show that he ran on his ChamSys MagicQ PC Wing with an Extra Wing.

Dimitriadis arranged some of the fixtures in his rig on five totems behind the DJ booth, spacing them out to preserve the sea view. Other fixtures were positioned on overhead hang points as well as on each side of the booth. This allowed him to hit the DJ and the widely separated tables on what would normally be the dance floor with an immersive web of light from every direction.

To convey “the energy of motion” through the movement of his light, he created a relentless flow of pixel mapped chase effects on his 10 colour bars. Dimitriadis, who used a Resolume Arena Video Server, credits his MagicQ PC Wing with helping him achieve these compelling looks

“The pixel mapping server and my MagicQ were invaluable,” he said. “I used Art-Net to connect the PC with Resolume. “Then I mapped the Resolume to my console to make it simple to use it. I pixel mapped the fixtures with my MagicQ.”

Rapid-fire crossing patterns that Dimitriadis created with the moving fixtures in his rig added to the sense of motion. “I wanted to make sure this show was fast,” he said. “The layout of the MagicQ was important in this regard. Throughout the show, I tried to make every moment unique in its appearance.”

By doing this, Dimitriadis was able to endow Cava Paradiso with a vibrant energy that reassured regular patrons who were returning to the club. The dance floor may have been empty, but it was alive with light; and the Aegean Sea in the background was as beautiful as they remembered.