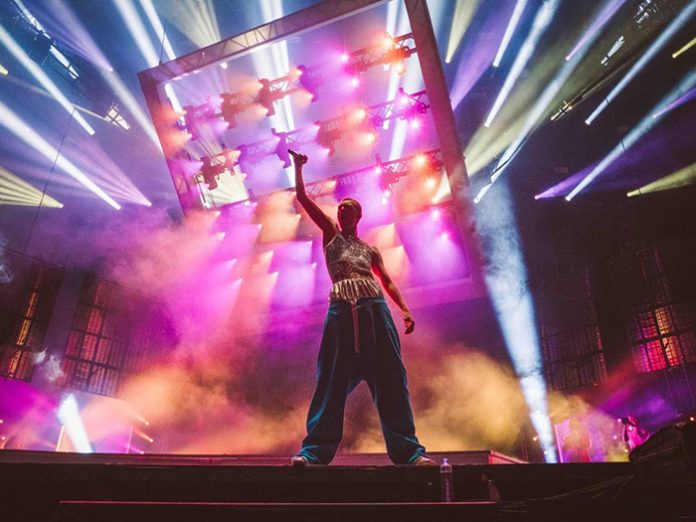 The singer, whose latest album, Noen ganger og andre (‘Sometimes and Others’), was the best-selling Norwegian-language album of 2017, has previously won Newcomer of the Year 2016 and Song of the Year 2017 in this annual music show and award ceremony which is aimed at young adults and organized by Norway’s NRK television station and P3 radio station. This year marked the sixth NRK P3 Gull Awards which aired on national television on 24 November 2018.

“We want to congratulate Cezinando on his fantastic win and would like to think it might have something to do with his killer concert at Øyafestivalen earlier this summer which had everyone talking!” said Frode Eggum Have of Bary AS, the company responsible for the production design of Cezinando’s show, and the supply of the majority of the technical equipment, including the Ayrton MagicBlade fixtures. The Øyafestivalen festival, which is held over four days in Tøyen Park, Oslo, is one of Norway’s biggest and most important music festivals.

Bary worked closely with Abrahamsen on Cezinando’s Øyafestivalen show, but Abrahamsen’s story with Ayrton MagicBlades began even earlier: “Before Cezinando’s summer tour, I really wanted to try out Ayrton’s MagicBlades as they seemed like interesting fixtures that could change the whole look of the stage design easily and quickly,” says Abrahamsen. “I really wanted to challenge myself to play with ‘walls of light’ and pixel-mapping in a show. I ended up using twelve Ayrton MagicBlade-R fixtures in Extended Mode on the tour, and immediately fell in love with them!

“For the Øyafestivalen show, I worked closely with Sebastian Ekeberg, Bary’s production designer, to find some fixtures that would complement with our current ground package, and fit into the stage design we had come up with. Weight, size, and output were important factors because of weight-restrictions, and we also wanted to have as many fixtures as possible in our rig, and to be able to play with pixel-mapping.

“It felt like a really natural progression to choose the MagicBlade-FX, as I already had MagicBlade-R in the show and the FX version met all of our requirements: they can be pixel-mapped, they’re lightweight, they’re small, the output is great, and the added zoom-feature is amazing and made my ‘walls of light’ concept easier to work with, plus they made the beam look really nice! I also have to admit that the thought of having a whole rig with endless pan and tilt intrigued me a lot!

“We made our choice and used twenty-four MagicBlade-FX in Extended Mode placed in a 6×4 grid in the roof, while still having our twelve MagicBlade-R in the ground package. I was able to create a lot of different shapes, some animations that made it look like the whole rig was moving, introduce a lot of pixel-mapping to create organic-feeling effects, and also use only the central emitter to make the MagicBlade-FX look like a completely different fixture. All these variations enabled me to make really different and unique looks for each song. It felt like I had endless creative possibilities with the fixtures, and I’m pretty sure MagicBlade-FX is my new favourite fixture, as of right now!

“I was actually so impressed with the Ayrton fixtures, that I then tried out six Ayrton Ghibli from Bary as a part of our ground package on our Autumn tour in October and was completely blown away by it!

“Bary delivered a total of 79fixtures to our Øyafestivalen show, and we ended up with 199fixtures, including the house rig, in the final showfile, which gave us 7201 parameters to play with. Filip Winter Hartvigsen, who designed the system, seamlessly incorporated my existing ground package into this one-off rig, and made it really easy for me to start programming in the WYSIWYG file that Sebastian Ekeberg had made.

“I want to say a huge thank you to Bary for making this show happen and being so helpful in realising these ideas, as I’d never have been able to do it without them!”

Bary is similarly happy with the outcome: “We would like to give a big thanks to Cezinando and his band, and his management Little Big Sister,” confirmed Have. “Kimarius Abrahamsen made everything look great with his lighting design and Sonic City made everything sound smooth with their sound techs. We must not forget our great supplier, Ayrton, who makes the coolest fixtures! And hats off to Bright for a solid technical delivery for the festival – and Øyafestivalen for hosting a great festival.”