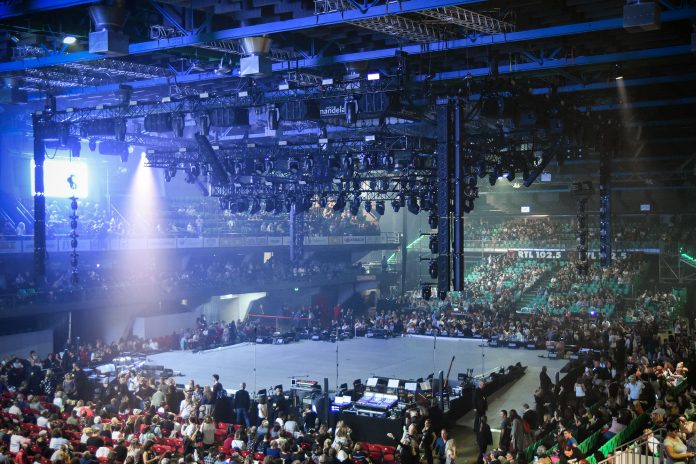 To celebrate the 50th anniversary of his storied career, Claudio Baglioni has set out on a national arena tour, impressing audiences with audio in the form of a Firenze-KH7 touring system.

Given the artist’s penchant for a central stage setup, rental company Agorà had the task of equipping the Al Centro tour with the best sound system that allowed for a mix in a 360° configuration as well as one that was as less invasive as possible, to not obstruct the audience’s view in the four-corner setup.

The choice of loudspeaker began with Baglioni’s requirement for a small footprint. With a compact design that allows sound to exit instantaneously without resonance yet generates a significant amount of sound pressure in the low and low-mid range resulting in a better impulse response and maximum clarity and definition, K-array became the benchmark straightaway.

360° Main PA included 8 clusters of 5 Firenze-KH7 (two per corner). The  Center fill had 4 clusters of 2 Firenze-KH7, whilst Subwoofers were 4 suspended lines of 6 Firenze-KS7 in an electronic arc configuration.

Advantages of the setup include a hyper-cardioid dispersion pattern. In the low end, the KH7 shows a hyper-cardioid dispersion pattern in the horizontal plane thanks to its Slim Array Technology, minimizing the amount of energy sent to the centre of the stage keeping it clear of noise pollution for the performers, and a super low-profile, with a Compact frame that is perfect for a 360° configuration.

Each cluster is less than 300 kg, including amplification and processing, and easy to mount. Together with lighting and video technicians, Agorà is able to have the system ready in just over 6 hours, while the dismantling is done in under three hours.

“Compared to traditional PAs, a significant advantage in using the KH7 is the fact that it can be flown straight and we don’t have to set up angles from the ground,” said PA manager, Edorado Michelori. “In fact, as soon as we see a motor point ready, we attack the system without having to ask anything from anyone”.

At the artist’s request, the front fill had to be flexible due to different spacing at the various venues. This Kayman setup gives the front fill a wide opening angle and by arranging the three column systems, the entire side is covered.

The decision to suspend the subwoofers was necessary to free the stage from barriers. The team was concerned that raising the drivers would result in a loss of power but because the system doesn’t lack power, all apprehensions were quickly subsided.

“The lower end is extremely complex to manage, just as much as the high-end frequencies,” said Daniele Tremontani, Sound Designer and Engineer. We created a ring of 24 subs whose angles have been delayed, forming a circle. Looking from within on the stage though, the graph of the dispersion behaves as if it were a flower with the petals with the maximum cancellation right at the centre of the stage.”

Thanks to the system’s Electronic Beam Steering technology, the team was able to achieve a uniform coverage usually within +-3dB, even in the biggest arenas where the distance from the stage to the last seat is more than 50 m.

Tremontani said: “I have to say that the system has exceeded expectations, especially in a 360°, a configuration that is very difficult to implement because one side plays towards you while 3 others play against you and arrive delayed, slaughtering the response in phase. This system is designed to handle this setup very well with an adequate acoustic impact and high intelligibility, which is not always possible with other systems where compressions are often used to find the right punch.”